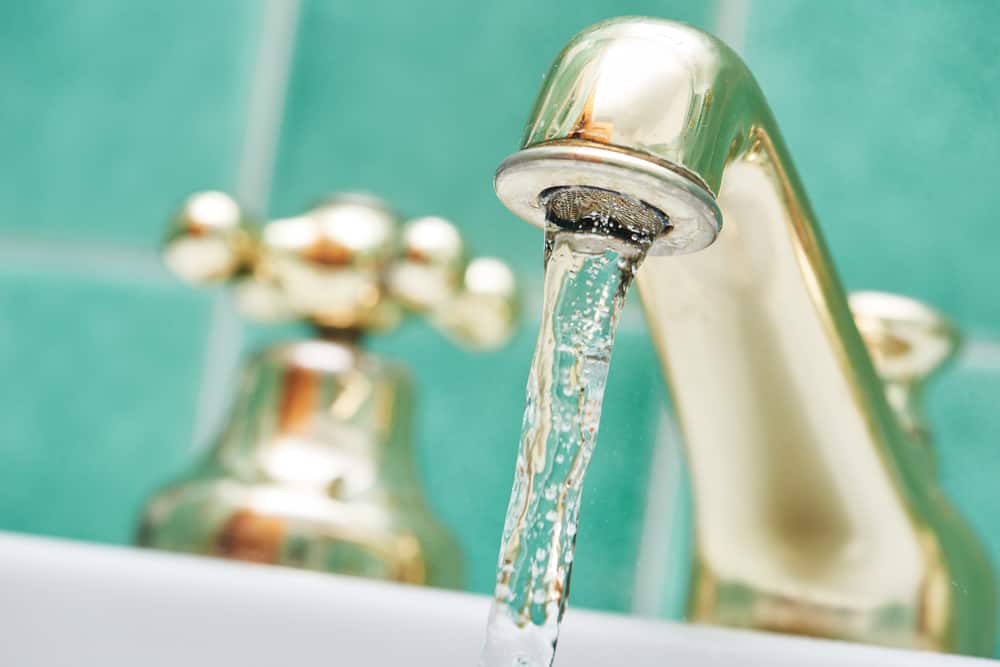 Seeing black water flowing into your sink is an unpleasant surprise and it probably has you jumping to the worst conclusions. Although it looks bad, it’s not, so don’t panic. There are a number of simple reasons this could be happening and you can fix many of them yourself.

Black water coming out of the faucet is most commonly caused by a build-up of minerals such as manganese in the water. It could also be due to parts of the plumbing system that have become worn and need replacing or repairing.

What Is The Black Stuff Coming Out Of My Faucet?

However, as there are a number of points of contact for the water before it reaches your faucet it means there are a few possible answers. This can be an issue within your plumbing system or it can simply be the result of local plumbing work. If you’re concerned about whether or not the water is safe to use, a water test can let you know what is causing the black water.

6 Reasons Why Black Stuff Is Coming Out Of Faucet

Below are 6 common causes of black stuff in your water:

The filtration system is there to remove impurities but older systems may be ineffective. If the filter isn’t removing impurities, this can lead to black water. The black specks in the water could also be carbon particles from the filter itself. This is a sign that it is time to replace the filter with a new one.

If the pipes in your home are old then there’s a chance they are rusty. This is something seen more often in steel and galvanized piping. The pipes begin to rust with age and this rust will flake off into the water. This rust will make the water slightly brown or red, in some cases it can cause the water to become very dark and almost black.

3. Build Up Of Mineral Deposits

A build-up of manganese can cause the water to turn black. It is common for manganese to be in water sources. Although, when it is in high enough quantities manganese turns black when mixed with oxygen. The mineral build-up can also be copper or iron too.

If only the hot water is coming out black it could be a problem with the water heater. There may be a layer of sediment that has built up in the bottom of the heater. This sediment build-up is quite common if you get water from a well or other private water source. If cold water is coming out of the faucet clear but hot water is discolored, it will likely be due to a water heater issue.

Here’s Why Black Specks In Water Is Not Dangerous

In most cases, black specks in water are harmless and the water is safe to use. As we discussed above, most of the time the black specks are the result of high levels of manganese in the water. This is completely harmless. It could also be copper and iron, both of which are safe for drinking. You can test your water to make sure it doesn’t have unsafe levels of minerals in it.

Even though black specks in water are not dangerous, black water doesn’t look appealing so it is unlikely you’ll want to drink or wash in it anyway. Black water is certainly not something you want to experience long-term. Fortunately, fixing the problem is relatively easy.

If your plumbing system uses old lead pipes, don’t drink the water as lead is not safe to drink.

How To Fix Burst Of Black Water Coming Out of Faucet

Black water doesn’t look great so you probably want to solve the problem as quickly as possible. Below are 5 ways to fix the problem so your water can run clear again.

Old or worn water softeners are often responsible for black water issues. Repair or replace the water softener to prevent the black beads from breaking down in your water supply.

The water filter may be inefficient or may be releasing carbon particles into the water. Either replace the filter cartridge with a new one or, if the system is old, it may be worth replacing the whole unit.

You can either use a water testing kit or get the water tested professionally. If the mineral levels are extremely high, you will need to install a water treatment system to deal with this.

Replace old, rusted pipes with new ones. Hire a professional for this as older pipes may be hidden behind walls. Replacing the pipes will stop rust and other particles from going into the water.

The problem may only be temporary, for example if the water has been shut off for a while then it should become clear again after it has had some time to run. Let the water run for 5 or so minutes and see if the color changes.

FAQs: Answers You Should Know

Why is there black stuff in my Brita water?

The black stuff is carbon particles that have come from the filter cartridge. Although harmless, these particles are an indication that it is time to change the filter.

Is it safe to shower in black water?

While it is usually safe, it is not recommended you shower in black water. Discolored water is a sign of an issue in the plumbing system so it is best to investigate and fix the issue as soon as possible. You can try running the water for a few minutes to see if this helps clear the pipes.

A corroded water heater, a build-up of minerals, pipe degradation, or water softener beads could all be responsible for turning hot water black. If the issue only occurs with hot water, take a look at the condition of the water heater first.

Black water coming out of the faucet may be an unpleasant surprise but it is usually harmless and easy to fix. For many of the problems, you will be able to identify and fix the issue yourself. However, it’s necessary to hire a professional plumber for certain situations. For example, to replace rusty pipes.