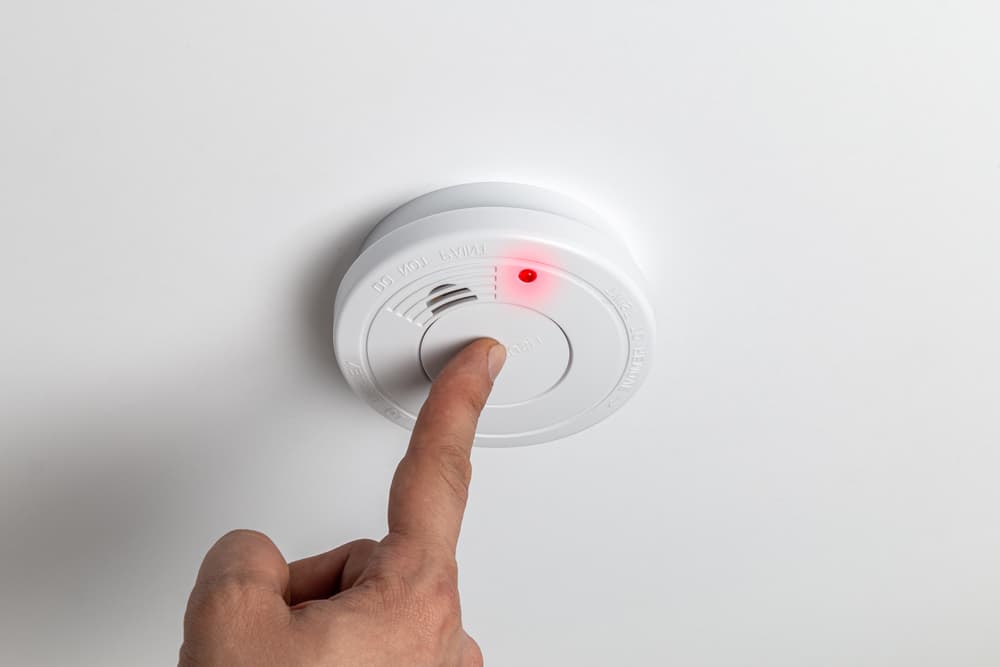 It is late at night, and you notice that there is a blinking red light on your smoke detector, but no sound. You wonder if something is wrong. Red is generally a warning color, so is it time to panic and get the family out of the house?

The table below shows what the red light could mean, based on the blinking interval:

What Does Blinking Red Light Mean On A Smoke Detector?

Smoke detectors use lights to signal a device malfunction or as alerts for situations that are not dangerous, including normal operation.

In most models, normal operation is signaled by a red light blinking slowly, at intervals between 40 and 60 seconds.

The majority of models will produce a sound with the light blinking in a specific pattern if fire or smoke is detected.

In addition to red light, smoke detectors can have flashing green, yellow, white, or a combination of lights that can blink every minute, rapidly in succession, or shine solidly.

Each blinking pattern can mean a different thing, based on the device make and model. Refer to your device’s user manual for troubleshooting.

No matter what smoke detector you have, if the red light seems to change from what you normally see, the smoke detector is trying to tell you something.

In almost all smoke detectors, normal operation is indicated by a red light flashing every 40 to 60 seconds. Sometimes, a stagnant green light accompanies the flashing red one, although this varies from model to model.

However, a stagnant (solid) red light is almost always an indicator that the device needs resetting.

No blinking red light could also indicate a malfunction.

You can check the user manual for troubleshooting or call the service center. Broken or faulty smoke detectors should be repaired or replaced immediately.

To reset the smoke detector, turn off the power at the circuit breaker and remove the battery. Press and hold the test or reset button for 15-30 seconds, until the LED indicator blinks.

Place the battery back in its slot, assemble the detector and switch on the circuit breaker.

Some smoke detectors will blink red to indicate that it is time to test the device to ensure it is working properly.

Press the test button on the device, and you should hear normal beeping. The blinking light will reset.

Refer to your user manual for specifics.

If the red light is flashing faster than usual, the battery may need replacement. Some models will also beep or chirp in addition to blinking to indicate a drained battery.

Do not ignore the beeping or silence the alarm.

Replace the battery and run a test to make sure it is working properly.

Most hard-wired smoke detectors have a battery backup, and they may also flash or chirp if the battery needs placement.

In addition to battery issues, the red light may also be blinking due to other power problems. For instance, the connection is lost or there is a wiring issue.

Some models may also give a battery-out signal after extended periods of power outage.

Some smoke detectors allow you to silence (desensitize) the alarm. Check to see if this is the reason for your blinking red light.

If silenced, the device may blink rapidly every 10 seconds or less to indicate an emergency.

If the alarm has gone off due to smoke that is non-threatening, reset the device to return it to its monitoring state. This may turn off the red light or return the blinking to its normal state.

If necessary, follow the steps above to reset the red light.

The National Fire Protection Association (NFPA) recommends replacing smoke detectors every ten years. Your device may have a red light that blinks to tell you it is time to replace it.

If you are unsure of the age of your detectors, consider replacing them.

Write the date of installation on the back in a permanent marker.

Dust, pet hair and other debris can settle onto the detection chamber of your smoke detectors.

Some models will alert with a blinking light that it needs to be cleaned.

Refer to your manual to clean this sensor.

If your detector is in an unfinished attic or uninsulated garage, it may blink the red light and sound the alarm due to the undesirable temperature.

Many models of smoke detectors are also carbon monoxide detectors that use a blinking light.

Typically, you will hear a sound for this alarm as well, as long as the device is not in silent mode.

If the light is blinking in conjunction with a loud sound, and there are signs of smoke or fire, get out of the house and contact the fire department.

In some cases, smoke from burnt food or cigarettes can set off a smoke detector.

The alarm can also continue to go off if there is lingering smoke that has not dissipated from a harmless situation.

In most cases, a blinking red light without sound does not cause concern. However, you should make sure you know what it means, so if your smoke detector needs maintenance, you can address it right away.

This video can help you troubleshoot the issue of a blinking red light:

The following ways are easy to implement. You can put reminders in your calendar, or add these to your monthly to-do list.

If you move into a new home, change and upgrade the smoke detectors so you know what you have and when they were put in.

When installing or replacing the smoke detectors, make sure it is done correctly by following the device manual. An electrician can help with hard-wiring.

Test the device immediately after installation.

The NFPA recommends that the batteries in smoke detectors be replaced every six months. Many homeowners like to do this with the change of seasons, such as spring and fall.

If the light is not blinking, it may need new batteries.

If the red light is flashing on the smoke detector after changing the battery, refer to your manual to troubleshoot the issue.

Your smoke detector has a test button. Press it and you will hear loud beeping.

Refer to your manual so you know what kind of beeping indicates that it is functioning normally.

Even if interconnected, smoke detectors must be tested individually.

Use a duster or soft cloth to carefully clean your smoke detector. You may need to remove it from the wall to clean the detection chamber.

The smoke detector may sound an alarm or flash a red light if it is removed from the wall.

Do this every six months, when you change the batteries.

How Many Smoke Detectors Should I Have In My Home?

According to the NFPA smoke detectors should be installed in the following locations of a home:

Additionally, every home should have an easily accessible fire extinguisher in the kitchen and on each level of the house. These can help extinguish small fires from the microwave, stove, or candles before they get out of hand.

Consider keeping a flexible fire escape ladder that attaches to second-story bedroom windows underneath a bed or in an accessible closet.

Installing a smoke detector correctly can prevent malfunctions and lights flashing in abnormal patterns. Follow the tips below for proper installation:

How do I turn off the red blinking light on my smoke detector?

Press the test button to turn off the red blinking light on your smoke detector. However, if your particular model uses this light to indicate normal operation, you cannot turn it off.

How do you reset the red light on a smoke detector?

The exact procedure might vary from one brand to another. Generally, you have to turn off the power and remove the battery, then press and hold the test or reset button for 15 to 30 seconds, until the light blinks. You can then replace the battery, assemble the smoke detector and switch on the power.

A blinking red light on a smoke detector without sound usually means there is not an emergency, unless you’ve muted the alarm. Thus, check your surroundings for signs of fire or smoke, and then refer to your user manual to determine the meaning of the light.

Your smoke detector may need cleaning, a new battery, or replacement. If it does not need any of these, then a flashing red light means that it is operating normally.