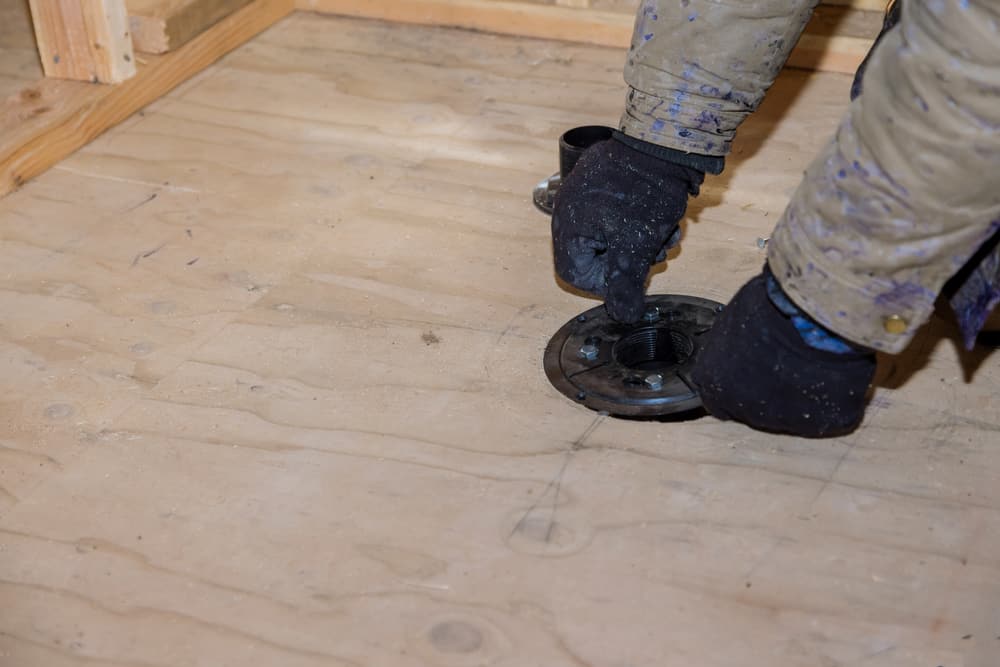 In most cases, you can install a tile, fiberglass, or build your own shower pan onto a plywood floor with relative ease. However, you should use a shower liner or a layer of waterproofing material to protect the plywood. Otherwise, there are few considerations for installing your shower pan.

How to Build a Shower Pan on Plywood Floor

Before you get started with building a shower pan, you’ll want to ensure that you have a properly framed and sealed shower drain rough-in.

You’ll also want to ensure that your flooring and subflooring are strong enough to support the shower pan you choose. For example, if you choose to use a pre-made fiberglass shower pan, you can probably just install it. On the other hand, if you want to hand lay a mortar shower pan, you’ll want to reinforce the subfloor under the shower pan first.

That’s important because mortar and tiles are extremely heavy. Your plywood won’t be able to support it without reinforcement. However, in most cases, simply doubling up the plywood is more than enough. For example, doubling a ½” sheet of plywood increases the support capacity from 35 pounds per square foot to 164 pounds per square foot. If you add to that with a few extra joists under the subfloor, your shower will be extremely sturdy.

The first step to building a shower pan is always to build a frame. Here, you’ll want to raise the frame above the rest of the floor. However, if you want to build a shower base for a walk-in shower, you can also get away with raising the floor around the shower. In most cases, the shower pan should be about 6 inches high. You can achieve this by stacking three 2x4s as part of the frame.

Install a waterproof layer directly on the concrete. This should always be either a latex-based sealant or asphalt felt. This will absorb water and prevent any humidity from penetrating into the plywood, which could cause it to rot.

Install plastic or galvanized metal mesh over the bottom of the shower pan base and on the wood frame. You need this to get the concrete to stick to the wood. If you’re using metal mesh, make sure that you fold any sharp edges inward. You’ll also want to create small waves in the mesh so the concrete sticks to it better. Make sure there are no sharp edges sticking up, where they could puncture the shower liner.

Place mesh over the lumber, so you can cover that with mortar and have a frame.

4. Place the First Layer of Mortar

Mix your mortar according to the package instructions and lay it in the bed. Here, you’ll want the minimum amount of water possible. The dryer the mortar, the less it will shrink as it dries, reducing the chance that your new shower pan cracks.

Slope the mortar bed with a ¼ to 3/8 inch slope from the edge of the pan to the drain. Use a level to ascertain the angle. You can also calculate the angle using the size of the shower. E.g, if you’re building a 3×3’ shower pan, the edge of the shower should start at ¾ of an inch above the drain level. You can draw a line around the frame to make it easier to get the mortar in. There are also commercial slope guides if you need them. Here, it’s always a good idea to pile mortar at the edge and use a straight edge or a board to pull the mortar down to the drain to create a smooth, angled line. Keep adding mortar until the full pan is formed.

Cover the frame with mortar and work it fully into the mesh.  Use a straight board to smooth the mortar. You’ll then have to allow the mortar to cure, usually overnight, but sometimes up to 48 hours.

Place your shower liner onto the cured concrete shower pan. Here, it’s important to ensure that your shower pan is properly sloped. Installing a shower pan on a flat floor will result in water buildup and leaks.

Additionally, you should always follow the instructions that come with the shower liner. However, there are best practices. For example, your liner should fit but should not be tight. In addition, you always want to fold rather than cut the corners. You can use silicone caulk to seal the edges. In addition, you should cut the liner to size with a box knife. You’ll also want to cut the drain hole with a box knife. Then, use silicone caulk to seal all cut edges to maintain the waterproofing.

Finally, you’ll want to use the drain clamps to seal the liner in place. In most cases, that means making small cuts in the liner for the drain bolts, passing them through, and then installing the drain riser overtop of it.

From there, you can either move on or allow the sealant to cure and flood test it.

6. Install the Tiler Backer Board

Install your tile backer board about a ½ inch above the shower liner surface. Take extra care not to put any nails or screws through the shower line while installing it. Here, you only have to install the lower portion of the backer board, as the rest can be installed at any time.

The top mortar layer should be 2-3″ thick and should be sloped to follow the existing slope of the shower pan. Here, you can normally create a uniform layer of mortar over your existing pan and simply follow the guide that is already there. You may want to spend extra time on smoothing this layer out. In addition, you may have to adjust your drain throat to accommodate the total thickness of the top layer plus the tile you put on top. The shower drain should just match the height of the tile, so you may want to have that on hand to ensure your measurements are correct.

Finish the shower curb with a similar layer. If it requires reinforcement, add an additional layer of wire mesh.

Use a finishing trowel to get a smooth finish. However, you can also use a large board or a straight edge. Work from back to front to get the best results.

Allow the concrete to fully cure. This normally takes about 48 hours. From there, you can begin installing your tile using thinset or a similar grout.

If you’re installing a fiberglass showerpan on a wood subfloor, you can skip most of the steps above. However, you probably still want some mortar, depending on your shower pan. Here, most shower pans want to be set in a small mortar base and fixed that way. In other cases, you’ll simply have to use adhesive to attach the fiberglass to the floor.

The idea here is to create a thin and flat space for the shower pan to rest on. Depending on the shower pan you’ll also want to create support for the edges and possibly to raise the full pan above the rest of the floor.

If you still have questions about installing a shower pan on a plywood floor, these answers should help.

Do I need a shower liner?

Yes. In any case where you’re installing a shower pan on a wood floor, you need a liner. That’s because any moisture leakage or condensation could cause your subfloor to rot.

How to prepare the subfloor for shower pan?

You’ll normally want to apply a layer of asphalt felt or roll on sealant directly to the plywood. From there, you can start to apply mortar. Without this layer, your concrete may still condensate directly onto the wood. This can become problematic over time if the plywood starts to rot.

How do you level a plywood subfloor for a shower pan?

If your plywood subfloor is not level, you can either use mortar or a foam-based leveling agent to correct this. However, it is always a good idea to ensure that your subfloor is sturdy and level, as this ensures weight is evenly distributed.

Can you install a shower pan directly on the subfloor?

It’s theoretically possible to install a shower pan directly onto the subfloor. However, a layer of mortar is always a good idea. For example, if you’re installing a fiberglass pan, it’s more likely to condensate or even crack if installed directly onto wood. In addition, you normally want a layer to absorb moisture between the shower and the subfloor.

Do you install the backer board or the shower pan first?

Installing a shower pan is a relatively simple job however it will take several days to complete. You can also choose to install a fiberglass pan, which is faster but less stable. In either case, make sure you install appropriate waterproofing and a shower liner to protect your plywood subfloor.