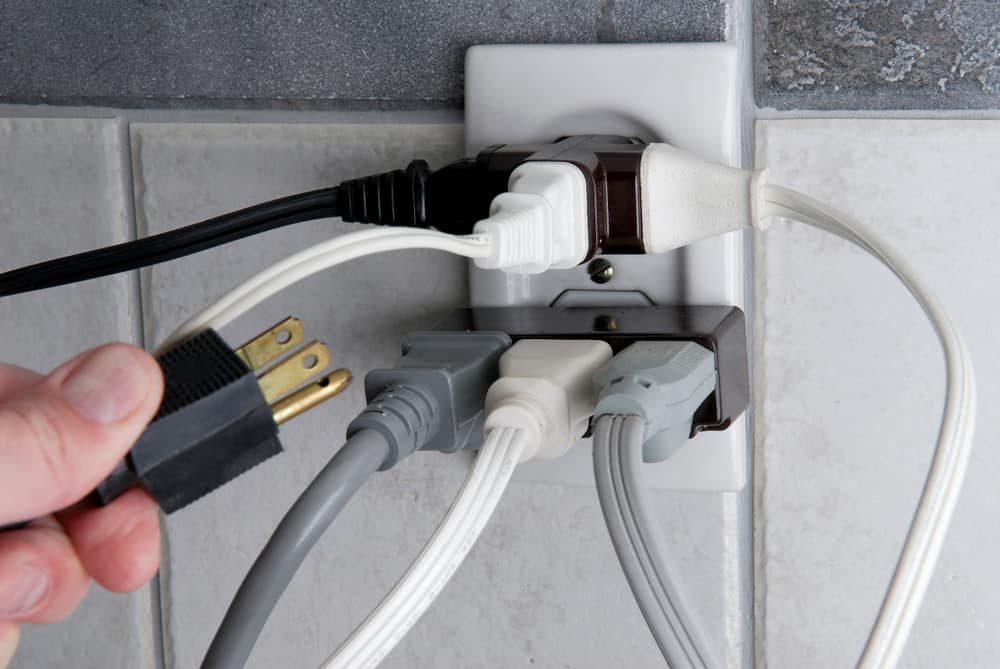 A refrigerator is one of the largest appliances you can have in your kitchen, and it’s working 24 hours a day. It takes a lot of electricity to power an appliance that big, but sometimes outlets can be scarce. You might wonder if it’s safe for your refrigerator to share an outlet.

No, a refrigerator can’t share an outlet with any other appliance without the risk of overloading the circuit. This can lead to a tripped breaker or even an electrical fire. It’s best to have a dedicated circuit for your refrigerator as well as an individual outlet.

Standard electrical outlets connect to either 15- or 20-amp circuits and can handle up to 120 volts. If you convert that into watts, the average outlet can provide 1800 watts of energy.

This assumes that there are no other outlets connected to that circuit. If there are, the number of watts a single outlet can provide decreases with each one.

It’s also a good idea to keep the power you use on each circuit at less than 1500 watts. This prevents you from accidentally overloading it if there are any power surges.

Surges can occur when an appliance first starts up or during thunderstorms.

The average refrigerator uses between 350 and 780 watts of electricity. That’s much less than even the suggestion of a maximum 1500 watts, but that average isn’t the whole story.

According to GE Appliances, refrigerator compressors can generate up to three times more power on start-up. So, whenever your fridge uses its compressor to circulate cold air, it can eat up most of an outlet’s power.

Your refrigerator shouldn’t share an outlet because of these start-up surges. Even an energy-efficient fridge can use up a lot of power when its compressor kicks on.

It’s always best to stay on the safe side when it comes to working with electricity.

If you have a fridge compressor that starts and stops all the time, check your outlet and circuit. A common reason for this issue is that the fridge isn’t getting the required power as described here.

But a faulty fridge isn’t the only problem that can come from using your electricity incorrectly.

What Happens When You Overload A Circuit?

An overload can happen when you use more power than the circuit can provide. Whether there’s too many outlets in use, or just too many heavy-duty appliances plugged in, this can cause a number of problems for your home.

At the very least this can trip the breaker, causing a power outage. This isn’t just annoying; it can also put an unnecessary strain on your electrical system.

This causes the system to work harder and run up your electric bill. Overloading can also blow out the fuse in some breaker boxes. You will have to replace the fuse before you can use the power again.

This is a drain on both your time and your money. Even worse, you could cause an electrical fire, which could threaten your home and your personal safety.

It can be tempting to maximize your outlet usage if you’re living in a small space, but it’s a risky idea. Solving the problem by having a refrigerator share an outlet with a TV or some other appliance isn’t worth it.

It’s much easier – and safer – to properly use your electrical sources.

How To Avoid Overloading A Circuit Or Outlet

The first thing to check when determining your power needs is the breaker box. It will tell you which circuits are individual branches, which are not, and the amperage of each one.

A dedicated or individual branch circuit is one that has only a single outlet attached. This allows the full power of the circuit to only be used through that one outlet.

An individual branch will show the name of the appliance it’s running (like your washing machine or refrigerator). Do not plug anything else into that appliance’s outlet.

If a circuit is not dedicated, it will list the room where the outlets it powers are located. Divide the circuit’s amps by the number of outlets in the room. This will give you the maximum amps for each.

Most manufacturers include a rating plate or tag on their appliances that gives you information about their power needs. This often includes the voltage, amperage, and wattage.

Once you figure out how much energy each of your appliances requires, then you can consider which outlet to use based on its number of amps.

The bottom line is that each circuit has a maximum amperage, and each outlet on that circuit is a fraction of that maximum.

Only plug in appliances that have less total amperage as a group than each outlet, and you will avoid overloading the entire system.

Does A Refrigerator Need a Dedicated Circuit?

While your fridge should not share an outlet with any other appliance, The National Electric Code (NEC) does not require a dedicated circuit for a refrigerator. But many electricians still recommend having an individual branch for your fridge to reduce the chance of overload.

You don’t need to up the power just for a fridge, though. If you choose to have an individual branch, a refrigerator can run on a standard 15-amp circuit without issue.

If your refrigerator does share a circuit, you should use a 20-amp, according to the NEC.

That extra power doesn’t mean you can put your fridge and your washing machine on the same circuit. You should still only share it with low-power appliances.

A mini fridge requires much less power than a full-sized fridge. Because of this, a mini refrigerator can share an outlet with other appliances.

You don’t want two fridges on the same outlet, though, no matter how small one of them is. You still need to ensure that the combined appliances do not exceed your power limits.

Does a garage fridge need a dedicated circuit?

Just like with the fridge in your kitchen, you do not need to have a dedicated circuit for your garage fridge. It does help mitigate the risk of overloading and causing a power failure

Of all your everyday appliances, your fridge is the last one you want to run out of power. You need to be especially careful with a garage fridge because it’s not one that you check very often.

If anything goes wrong, it can be hard to notice right away.

It’s common to keep a freezer in the garage as well, since freezers built into standard fridges are often small. A stand-alone freezer runs on the same amount of power as a refrigerator, so the same rules still apply.

This includes trying to plug a fridge and freezer into the same outlet. Each appliance needs too much power to safely plug into the same spot.

It’s best to find a spot where they each can have their own power source.

Can a refrigerator plug into any outlet?

A refrigerator does not need a special type of outlet. The average three-pronged outlet provides enough power for a fridge’s typical needs.

It can also handle when the compressor cycles on and draws more power than usual. You should never modify your fridge’s power cord to fit a two-pronged outlet, however.

This is dangerous and can cause injury and electrical damage to your home.

When planning the layout of your kitchen appliances, consider your electrical sources wisely. A refrigerator can’t share an outlet without the risk of overload.

Any kind of electrical work should be handled with care, as the consequences of mishandling electricity can be severe. Even plugging in appliances should take careful consideration.

If you plan ahead, you’ll save time, effort, and money.