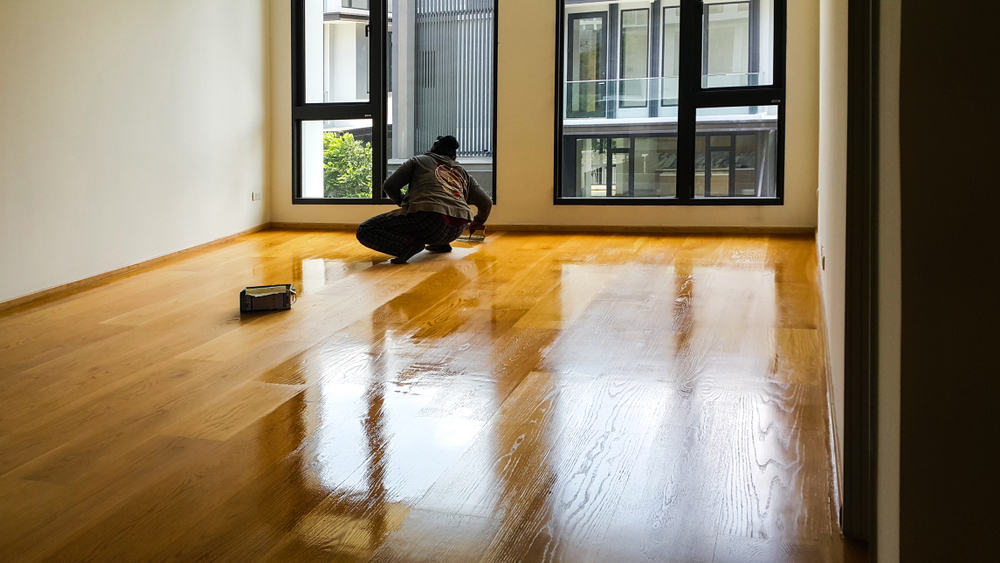 Nothing brings an aging hardwood floor or an antique cabinet back to life like a shimmering coat of polyurethane sealant. It can rejuvenate even the dullest wood into a showpiece, and it has the added benefit of protecting the wood from scrapes, dents, and water damage.

But polyurethane is also a volatile chemical, which means you need to take precautions when using it. So is it safe to sleep in your home after using polyurethane on your floors?

Can You Sleep In The House After Polyurethane?

The simple answer is yes, eventually, and it depends on which sealant you use. Oil-based polyurethane has more off-gassing volatile organic compounds (VOCs) than water-based, which means a longer time away from the room.

How Long To Wait After Water Based Polyurethane?

Water-based sealant is lower in volatile chemicals than oil-based, but it also requires more coats than the oil-based version to get the same effect. It cleans up easily with soap and water, and it dries and cures in about 24 hours.

Until fully cured, the varnish releases toxic fumes. This is why experts recommend spending the first night after application elsewhere if possible.

However, it’s generally accepted that you can sleep in the house after using water based polyurethane as long as you’re not in the room where the sealant was applied.

How Long To Wait After Oil Based Polyurethane?

Despite being more toxic, oil-based polyurethane is often preferred due to its rich color and hard, durable finish achieved with just one or two coats.

On the downside, it takes longer to dry between coats than water-based, and you’ll need mineral spirits (paint thinner) to clean up afterward.

You can sleep in the house after oil-based polyurethane once the first 48 hours have passed but in another room. If possible, five to seven days away is ideal. In either case, it’s important to make sure you have other accommodations in place.

If you’ve used a hybrid polyurethane coat (containing a mix of water- and oil-based ingredients), stay away for at least 48 hours and sleep in another room for another five to seven days after returning home.

Can I Stay In My House While Floors Are Refinished?

No, you shouldn’t stay in your house while the floors are refinished.

Polyurethane is a varnish made of polymer resins that bond with the cracks and fissures in wood. While these resins are not toxic once they are fully dry, wet polyurethane contains isocyanates.

These chemicals are common in a number of plastic-based products and are often referred to as VOCs or volatile organic compounds.

VOCs are airborne particulates and chemicals released into the air in a process known as off-gassing. In the case of polyurethane sealants, these particles hang around for quite some time after application while the product cures.

Isocyanates can damage the lungs and irritate the eyes, nose, and skin. The fumes can trigger breathing troubles, headaches, coughing, nausea, and even vomiting.

Severe symptoms triggered by polyurethane fumes are more evident in babies and sometimes in pets.

There are other health concerns associated with isocyanates, including cancer and even birth defects, but these are almost always associated with long-term exposure. Simply put, if you’re not using sealants on a daily basis over the course of years, you don’t need to worry about these potential dangers.

How Do You Use Polyurethane Safely?

Once you’ve chosen your sealant, the key to safety is making sure you use it properly. There are two stages of the process: applying and curing.

Can I use polyurethane if I’m pregnant?

Because of the potential health risks of polyurethane sealants, it’s generally recommended to avoid applying these products while pregnant or use an alternative. That said, if used properly, the sealant isn’t considered dangerous once it has dried.

Is polyurethane safe for pets?

Pets have the same reaction to isocyanates as humans and should be kept away from the room where the sealant has been applied for the same amount of time as humans.

Can polyurethane fumes kill you?

Generally, polyurethane cannot kill you unless you have a severe allergic reaction to it. However, polyurethane fumes can cause lung damage and long-term health effects after prolonged exposure. Acute symptoms include headaches, breathing difficulties, coughing, nausea, and vomiting.

How long after staining floors can you walk on them?

You should wait a minimum of 24 hours after staining your floors before walking on them. It is recommended to wear socks only (no shoes or bare feet) for at least 48 hours once the varnish is dry.

Is polyurethane toxic after it dries?

No, polyurethane is not toxic once it dries. The off-gassing process ceases once the coat is fully cured.

A hardwood floor is an investment that can last a lifetime, so it’s important to maintain it. Polyurethane sealant can definitely be a part of that maintenance, but you need to make sure you understand the product before you choose to use it.

As a general rule, you should not sleep in your house for at least 24 to 48 hours after polyurethane, preferably more if you used oil-based varnish.