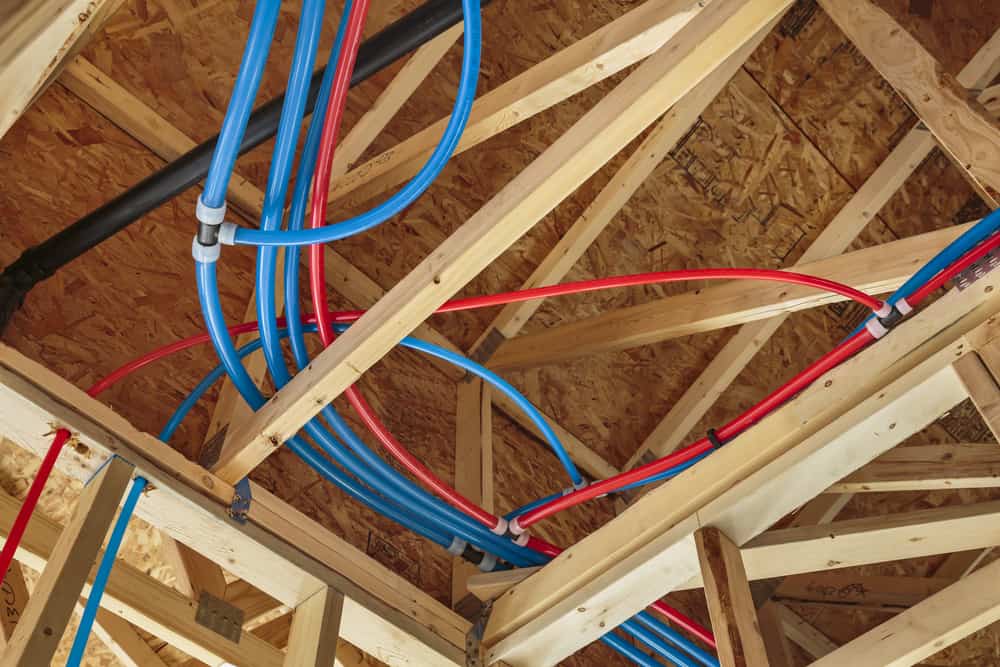 PEX pipe is the easiest DIY pipe for installing hot water to your shower, radiator, or even sink. However, it’s also incredibly vulnerable to UV and needs to be covered. In fact, if you don’t cover exposed PEX pipe, it will likely crack and leak within a few months at most.

Luckily, learning how to install a PEX pipe cover is relatively simple. In every case, you can buy an affordable cover from your hardware store. From there, installation is also simple.

How to Cover Exposed PEX Pipe

The easiest way to cover exposed PEX pipe is to buy a cover or a stub. These are fast, affordable, and do the job well. Most importantly, they fit well, because they are made for the purpose. If you’d rather not, there are a couple of DIY solutions you can try instead, but they won’t look as professional.

Installing a PEX stub out bracket with wall flange

In most cases, if you want to cover exposed PEX pipe, it’s the stub out of the wall. Normally, this runs from the wall to the faucet or the radiator. Here, the best way to cover your PEX pipe is to buy a stub out bracket with a wall flange.

A stub out bracket is a small tube with a flange at the end. They’re normally sold to match bathroom fixtures and the most common color is chrome. They also feature holes in the flange, which allows you to attach it to the wall.

Installing a PEX wall cover is relatively easy. However, you’ll want to do it before installing the fixture. If you’ve already installed the fixture, you’ll have to take it off.

From there, you can cut your PEX pipe to size and finish installing your faucet or fixture with copper crimping rings or expansion connectors. This method works for any fixture, ranging from a sink to a shower or a tub or even a radiator.

If you’ve run a PEX pipe up a wall or to a radiator, you’ll have a longer exposed length. This means you’ll need a longer cover to prevent it from damage. Here, a pipe cover is your best option. These covers normally mount flat to a wall, over an attached pipe. In this case, you might have an option that attaches using wall brackets. You might also have an option that uses adhesive to stick to the wall. You should choose your option based on your wall.

Here, the most important part of installing the PEX wall cover is to line the cover up in a way that doesn’t crimp or bend the PEX. While PEX is flexible, most covers are not. If you’ve bent or rounded corners with the pipe, it may be difficult to cover without installing a box over the whole thing.

Most hardware stores sell pipe covers in a variety of sizes and formats. You can easily buy some to match your wall or fixtures.

If you don’t have the space for a wall cover or can’t find one, you can also build a box around the PEX. However, this can be ugly. Most people prefer to either install the PEX inside the wall or to use pipe covers.

Installing your wall cover is a simple matter of building a box. PEX pipe ranges from 3/8ths to 1-inch for residential usage. You can check which you have and get a smaller wood if you have 3/8ths (1×2) will be fine in this case.

You’ll likely want to touch up the paint to finish.

Installing PEX inside of PVC

If you don’t have access to a PEX pipe covertube and flange, you can almost always install PEX inside of a PVC pipe. This might be ugly. However, it does prevent the PEX from degrading while you find a better solution.

Here, you’ll want a PVC pipe that is slightly larger than the diameter of your PEX pipe. Here, PEX can be tricky. Why? It’s sized by the Copper Tubing Size (CTS) rather than the inside or outside diameter. That’s because PEX works with copper and CPVC fittings, not PVC fittings.

You always want to buy PVC that’s larger than the outside, so that your PEX slides easily inside.

From there, you can simply cut the PVC to size. You might want to use fittings and corners as well. Slide the PEX inside the PVC and attach everything. Then, silicone or seal the ends in some other way.

If you still have questions about installing PEX pipe, these answers may help.

Can PEX Be Exposed?

How to Cap Off PEX Pipe?

In most cases, you can cap off PEX pipe with a barbed plug or a copper expansion plug. These end caps are sold in the hardware store alongside PEX pipe. It’s important to check which type of plug you have. For example, if you have an expansion plug, you need an expansion tool.

Additionally, you can use a copper crimp plug. These are simply crimped over the ends, just like with crimp fittings.

How to protect PEX?

PEX should be covered wherever it is installed. You can use suspension clips, silicone, and foam pipe molding to protect PEX where it runs alongside joints and wood or holes. Installing a good cover is the most important step here because UV will degrade most PEX pipe.

Can I paint PEX?

PEX pipe contracts and expands a significant amount as it heats and cools. Therefore, paint will crack off the pipe. Instead, you’re much better off using a cover to protect your PEX pipe.

How long can PEX be exposed to sunlight?

If you’re wondering how long PEX will last without being uncovered, check the manufacturer’s instructions. However, most manufacturers recommend limiting exposure to a maximum of 30-60 days. Some UV resistant PEX can be stored outside or uncovered for longer.

Can I install PEX everywhere?

PEX should not be installed in high heat areas. For example, you shouldn’t use it to make direct connections to a radiator or to a water heater. However, you can run it to copper tubing to make the final connection.

How do I insulate PEX?

Pipe insulating foam is the best choice for PEX. Why? It expands and contracts with the pipe. Heat tape and other insulating methods might not be as flexible, which might result in eventual cracking and exposure.

PEX pipes are easy to install, color coded, and even flexible. At the same time, they have to be covered. Hopefully, this guide on how to cover exposed PEX pipe helps you do so with a minimum of difficulty. In most cases, you can finish the job with a simple PEX wall flange. In other cases, you might want to use piping. Whatever your choice, hopefully your plumbing stays in good condition for a long time to come.