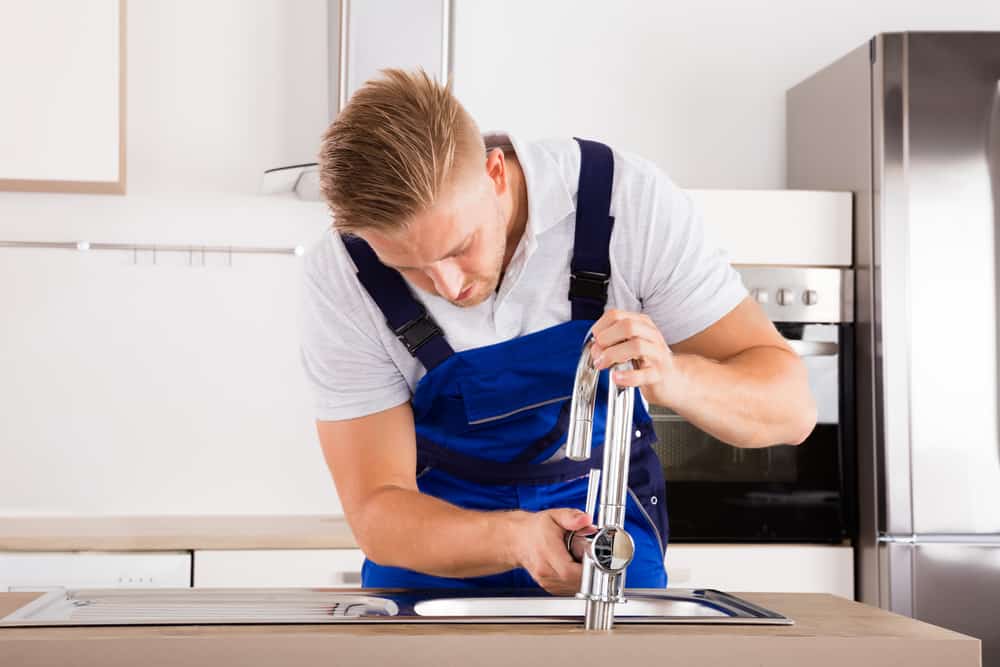 Designed with practicality in mind, kitchen faucets are supposed to swivel from side to side. This feature comes in handy when you have a double sink, but also for directing the water stream where it is needed while washing dishes or fruit and vegetables. Problems arise when the faucet stops swiveling for one reason or another. If yours doesn’t swivel anymore, how to fix it?

More often than not, a kitchen faucet won’t swivel because the sleeve inside its neck is worn out and scratches against the metal. This friction prevents the spout from moving freely. Debris or a damaged O-ring inside the spout are other common causes.

Do All Kitchen Faucets Swivel?

Not all kitchen faucets swivel, but the vast majority do. Most kitchen faucets on the market offer a swivel between 180° and 360°, allowing users to rotate the spout and control the water flow.

Swivel faucets come in multiple styles, including ball, cartridge, and disc-type. Regardless of the style, all kitchen faucets are constructed based on the same principles: the spout is not directly connected to the main body but slides over an (or series of) upper and lower O-ring.

The O-rings have a dual function. On the one hand, they prevent leakage. On the other hand, they act as bearings, allowing the spout to swivel.

However, there are also fixed kitchen faucets. These faucets have a spout fixed in a position, but some models have pullout or pulldown attachments that still allow you to direct the water stream and control the flow.

Why Your Kitchen Faucet Won’t Rotate?

Swivel kitchen faucets are very popular, thanks to their simple design, durability, and affordable price tag. However, they can sometimes have rotation problems. Here are the most common reasons.

To tell if that’s the case, try to rotate the spout and pay attention to any noises. If you hear a grinding sound, use an adjustable wrench to loosen the cap and sleeve nut by a quarter turn. This will usually free up the spout to allow for seamless rotation while maintaining the leak-proof integrity of the O-rings.

Overtightening will not only prevent the spout from turning; it can also damage the O-rings, causing them to gum up.

Gummed-up O-rings can block the spout’s free swivel, and they will also start leaking sooner or later.

One thing very few people know is that food particles can work their way inside the spout assembly and block the swivel mechanism.

This often happens due to splashes, especially when you’re clearing plates or washing food residues off your pots and pans using higher water pressure.

To prevent this issue, make sure to clean the faucet each time after using it. Clean the spout but also the area around the faucet’s base.

Considering that over 80% of homes in the United States have hard water, scale build-up is another potential problem. While the O-rings prevent the spout from leaking, the scale can still build up inside the faucet and damage the swiveling mechanism.

The most effective way to prevent scale build-up is using a water softener. You should also clean the faucet with white vinegar – or a chemical descaler – at least once a week if the water in your area is very hard. Lemon juice and baking soda could also work, but make sure to patch-test any product you plan to use in a hidden spot of your faucet to make sure it doesn’t damage the finish.

The scale won’t only cause blockages, but the mineral deposits can also corrode the faucet’s metal core, leading to rust issues.

How to Fix a Kitchen Faucet That Is Hard to Swivel

Dealing with a kitchen faucet that has stopped swiveling can be distressing, but fixing it is easier than you think. Check our step-by-step guides for the most popular faucet brands – these methods also apply to other faucet makes and models.

Delta is one of the most popular brands of ball and cartridge faucets. You can fix both types following the quick steps below.

Step 1 – Take off the faucet handle

Turn off the water shut-off valves (located under your sink) or shut off the main water supply and turn on the faucet. This step allows you to drain all water from the faucet before disassembling it.

Once the flow stops, use the Allen wrench to unfasten the handle retaining screw underneath the faucet’s lever. Lift off the handle when the screw is free – some faucets have a decorative cap placed over the screw; use a flat-head screwdriver to dislodge it from its place if your faucet has one.

Once protected by the glove, grip the collar with your adjustable pliers and turn it counterclockwise to unscrew it. Then, remove the collar and ball, and set them aside.

Gummed-up O-rings can be difficult to remove and replace, so you may have to lubricate them first. To do that, drop some penetrating oil in the space between the valve seat and spout housing. Wait for about ten minutes, then try to swivel the spout.

If it doesn’t move, apply more oil and wait for another ten minutes. Hot water poured over the spout may also help soften the damaged O-rings.

When you can turn the spout easily from one side to another, lift the spout housing off the valve and remove the damaged O-rings. If they are stuck to the valve, use a utility knife to cut them off. Clean the valve with a rag soaked in mineral spirits.

Step 5 – Replace the O-rings and reassemble the faucet

Coat the new O-rings with silicone-based grease and slide them over the valve. Apply some more grease over the rubber seals, then slide the spout housing back in its place.

Replace the ball or cartridge, then screw on the collar by turning it clockwise. Tighten it to prevent leaks, but pay attention to not overtighten.

Lastly, replace the handle and screw, then turn on the water and check for leaks. If the faucet is leaking, tighten the collar one quart-turn at a time until it doesn’t leak anymore.

When lubricating the new O-rings, also keep in mind that you should only use silicone-based grease. Regular plumber’s grease or petroleum-based products can damage the rubber.

Step 1 – Disassemble the faucet and remove the O-rings

Use the Allen wrench and pliers to disassemble the faucet’s handle and metal collar, then lubricate the old O-rings with silicone grease. Lubricants containing petroleum, plumber’s grade faucet grease, and silicone sprays can damage the rubber seals and make the spout difficult to operate.

When you can swivel the spout freely, remove the spout sleeve and slip off the O-rings. The number of O-rings differs from one Moen faucet to another, so pay attention to how many seals your faucet has.

Clean the spout and make sure it’s free of any debris or mineral build-up. Replace the old O-rings with appropriate O-rings from the brand – buy a faucet service kit that matches your faucet model.

Lubricate the new O-rings with silicone-based grease, then reinstall the faucet.

Step 3 – Inspect the retainer nut on the spout

Not all Moen faucets have a retainer nut, but if your model does, inspect it and make sure it’s not fastened too tight. This nut is located underneath the sink and, if it’s overly tight, it could make the spout difficult to rotate.

If your Moen faucet has a pullout or pulldown assembly, skip all the steps above and remove the spout receptor. Clean any debris that is impending movement, mount the receptor back and check the swivel.

If the spout still doesn’t swivel or if you spot corrosion on the receptor or valve interior, you have to replace the entire faucet.

A non-pullout or non-pulldown kitchen faucet that doesn’t swivel is easy to fix, but pullout or pulldown models might have to be replaced.

Have you ever fixed a kitchen faucet that won’t swivel before? Tell us your tips and tricks, or ask a question in a comment below.