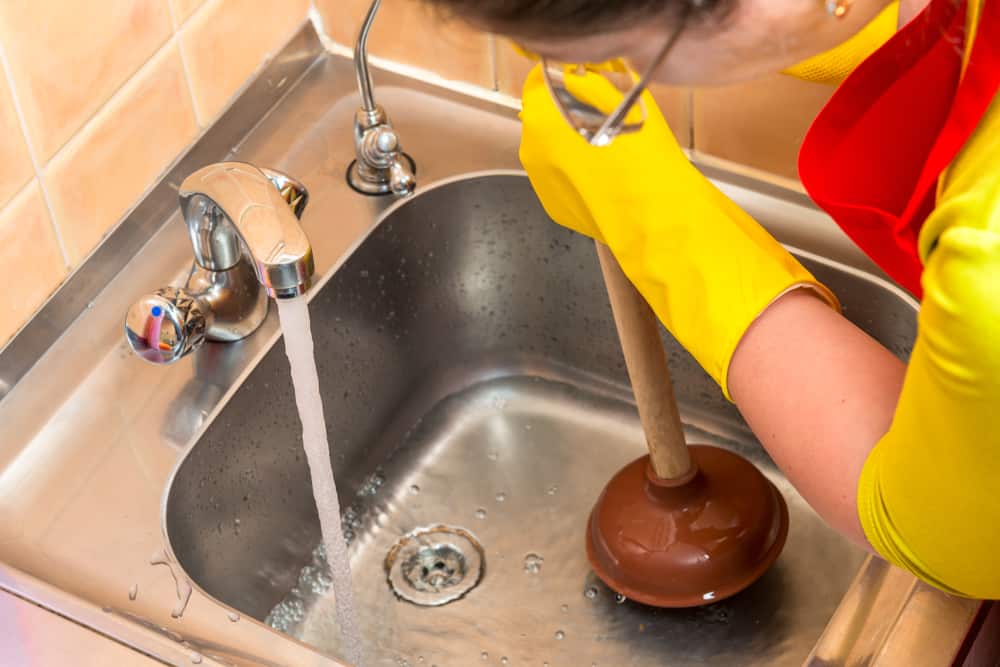 Is your kitchen sink draining water too slowly or not at all? The situation can be frustrating if you’ve already checked the pipes and they’re unclogged. After all, how can you fix the problem if you don’t even know what’s causing it?

A common reason why your kitchen sink won’t drain despite clear pipes is a clogged plumbing vent. A clogged P-trap or garbage disposal, if you have one, can also prevent water from draining. Some of these issues are easy to fix yourself, while others will require professional intervention.

Kitchen sinks are the most heavily used in homes, so clogging issues are common. However, if you’ve made sure the pipes are clear, yet your skin won’t drain, know that the culprit could be the garbage disposal.

This device equips most kitchens (although you should check under your sink to make sure you have one) and is designed to collect any solid waste that finds its way down the drain and shred it into small pieces. In this way, this appliance prevents your pipes from getting clogged.

However, the garbage disposal can have its own set of problems, and when it clogs, it could prevent water from flowing freely.

Some things that could lead to clogs and blockages in the garbage disposal include potato peels, grease, paper towels, or foreign objects such as plastic cutlery or plastic bottle caps.

The P-trap is a U-shaped portion of a drain pipe designed to trap liquid and prevent unwanted sewage gases from leaking into your home.

P-traps are present on all drains in a home, including your kitchen and bathroom sinks as well as the toilet.

In the kitchen, the P-trap also works as a trap for solid matter making its way into the drain. Food scraps and other debris usually accumulate inside it rather than getting flushed further down the drain. Thus, the P-trap prevents your pipes from clogging.

However, all that waste can clog the P-trap – something that could be harder to diagnose than you think. If you’ve checked the pipes and they are clear, but you haven’t checked this plumbing portion, you should take the P-trap off and clean it.

Without getting into the nitty-gritty of plumbing systems, all drains consist of water pipes and air vents. Air vents are needed to ensure a proper flow of water. In fact, an improper flow of air in your system could block water flow, meaning that your sink and toilet won’t drain.

The issue generally interests only a portion of the system. Thus, you could have problems in the kitchen or bathroom. Sometimes, the entire venting system gets clogged, and then you’ll notice that water won’t drain from any of your fixtures.

In addition to ensuring a proper flow, air vents also let sewage gases escape from your home, and they usually open above the roof level. Clogs often happen because of birds or small mammals building their nests inside them or due to debris falling inside the vents.

If you’ve just moved into a new home or have remodeled your kitchen, the issue could be a drain pipe installed at the wrong angle.

A wrong angle might not stop the flow completely, but it can slow it. Due to a lower flow rate, waste can also accumulate faster, eventually clogging the drain. Solid waste isn’t your only issue; grease and soap scums can also clog the pipes.

To check the pipe angle, look under your sink. If the pipe is mostly straight instead of going downwards, you should take it off and clean it, then have a plumber address the issue.

Not many people know that grease can do more damage to your kitchen sink pipes than any other food waste.

Since grease is liquid when you flush it down, you may think that it’s just washed away. However, all grease you’ve used for cooking, including vegetable oil, congeals on the pipes creating clogs that are very hard to detect with a plumber’s snake.

If heavy grease is blocking your kitchen drain, you might first experience a slower flow before a complete stall. You could also notice that the water doesn’t drain at all when you’re using cold water, but it slowly drains when it is hot; this happens because the hot water melts some of the congealed grease.

You’ll have to power-wash the pipes with a hydro jet that blasts water in all directions to solve the issue. Preferably, use hot water to eliminate all congealed grease, and remember to always dispose of cooking grease in the trash (wait for it to solidify after cooking, then throw it in the bin).

Trying to fix an issue when you don’t know what’s causing it can be frustrating. More often than not, the problem is a clogged P-trap, a clogged pipe vent, or a wrong pipe slope. Here’s how to fix these issues.

How to Fix P-Trap Clog

To unclog a P-trap, you’ll have to take it down, remove the blockage manually, clean it, and install it back. You’ll need:

Here’s how to do it:

How to Unclog a Vent Pipe

Vents pipes are similar to drain pipes, so you can use a plumber’s snake to unclog them. The proper way is to climb onto the roof; however, if you have PVC vent pipes and don’t want to climb out there, you could fix the issue from inside.

If you don’t feel like climbing onto your roof, locate the vent pipe in your attic and cut a small opening in it. Use the plumber’s snake to remove any blockages, working both downward and upward.

An improper pipe slope is one of the most expensive plumbing mistakes you might have to deal with. Whether you projected the draining system yourself or trusted an unprepared plumber, your sink might not drain if the angle isn’t right.

As you can imagine, solid waste can easily pile up on an undersloped drain. But this isn’t the only issue. An oversloped pipe can block flow just as much. Because the water flows too fast, leaving behind the solids, oversloped pipes are as likely to clog as undersloped ones.

Sure, an undersloped pipe or wrongly angled one could also slow the flow or cause the water to stall completely.

As a general rule, the drain line should have a slope of ¼ inch per foot of pipe. Use a level to check the angle. If you’re dealing with an underslope, take off the section and clean it of any clogs – this could temporarily help the flow. However, an improper pipe slope can only be fixed by a licensed plumber.

The most likely problem is a clogged P-trap or vent pipe if the kitchen sink won’t drain despite clear pipes. However, plumbing mistakes happen sometimes, especially if your pipes weren’t installed by a professional.

While you could call in the plumber and ask them to fix the mistake if you just had your kitchen sink’s plumbing system installed, it could take quite a while before detecting a slope problem. Thus, you’ll likely have to hire someone else.

Have you ever dealt with kitchen sink drain issues despite unclogged pipes? What was the problem, and how did you fix it? Tell us your thoughts and advice in a comment.