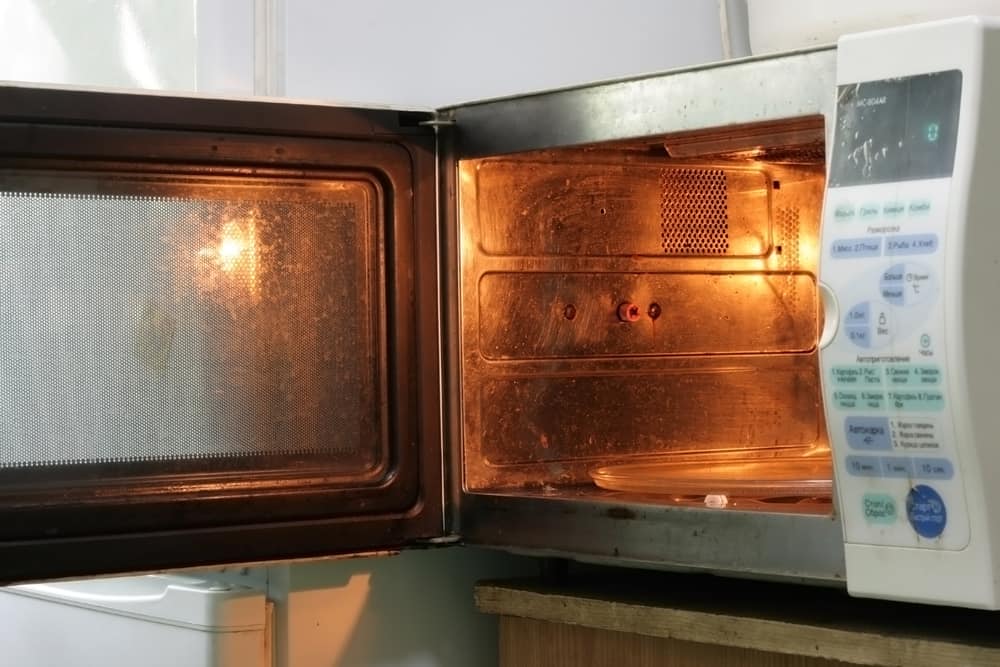 Everyone who’s ever used a microwave in their lifetime knows that it runs when you close the door and stops when you open it. Thus, finding yourself in front of a microwave running when the door opens is confusing and concerning at the same time. Why does it happen, and is it dangerous?

Here’s Why Your Microwave Keeps Running with Door Open

There are two distinct situations when your microwave runs with the door open. In the first instance, the appliance starts running normally (aka, when you close the door and press the start button) but keeps running when you open the door. A door switch malfunction almost always causes this issue.

Another situation happens when the microwave doesn’t run when the door is closed, but it turns on when you open the door.

This problem is caused by faulty wiring or water accumulated in the motor. While you shouldn’t fix this issue yourself unless you’re a trained electrician or microwave technician, you could try and fix a door switch malfunction.

The door switch on your microwave, called an interlock switch, is a simple on/off mechanism whose role is to stop the appliance when the door is open. The switch is generally mounted on a bracket near the door latch and uses two or three metal prongs to transmit a signal to the motor.

When you press the start button, the prongs detect whether the door is closed and turn it on or if the door is open, in this case prohibiting the appliance from starting.

All microwaves have three or four door switches, and it is rare for all of them to break at the same time. For this reason, most microwaves that keep running when the door is open don’t have a faulty switch but a broken or damaged latch.

Thus, before testing the switch, you should inspect the latch and ensure it’s in good working order. If it is, here’s how to test the switch and fix the issue.

How to Fix a Kitchen Microwave that Starts when Door Opens

Before you start, make sure your microwave is unplugged and the capacitor is uncharged; then, proceed to test the switch and replace it if needed. Here’s how to do it.

Step 1 – Remove the keypad and access your microwave’s smartboard

Most microwave ovens have a smartboard located behind the keypad, so you’ll have to remove the pad to access it.

To do that, carefully remove the upper side of the oven’s cabinet – this component should come off easily by pulling it.

Once you’ve removed the cabinet face, locate the screws holding the keypad in place. Use your Phillips screwdriver and the appropriate Torx bit to remove the fasteners and gently take off the keypad.

Check out your oven’s manual to find out how many switches there are on your microwave. The manual should also indicate their position, but if it doesn’t, inspect the oven’s area right behind the keypad to find them.

Using your Phillips screwdriver and the appropriate driver bit, unscrew the fasteners keeping the electronic panel closed, and remove them to access the panel.

Step 4 – Take out the switch assembly

Once you’ve opened the electric panel, pull out the switch assembly, then remove each of the three or four switches from the board. A microwave’s smartboard looks pretty much like a computer motherboard, so if you’re at least a little familiar with how desktop computers are made, this step should be child’s play.

Each switch on a microwave has a button that snaps back in place when released after you’ve pressed it. However, a faulty switch button will remain pressed, so finding the faulty part shouldn’t be hard. Press the button on each switch and see which one doesn’t snap back. That’s the switch you’ll have to replace.

Once you’ve found the culprit, buy a new microwave door switch, paying attention to get the same switch model. The best thing is to buy replacement parts directly from the manufacturer, although you could find compatible parts for most makes and models.

Microwave door switches can cost you anywhere between $5 and $100, depending on the microwave model you have.

After you’ve bought the new switch, install it on the electric board together with the other switches you’ve taken off.

Step 7 – Put everything back and test your microwave

Now that you’ve replaced the switch, put everything back by reversing the steps above, plug in your microwave and test it to make sure that it works properly.

While you now know how to fix the microwave if it has a broken switch, you may still have some questions about it running with the door open. Let’s check out the answers.

Is it dangerous if the microwave runs with the door open?

Yes, a microwave running with the door open can be dangerous. Microwaves work by heating the wet component of the food you place in it. If you didn’t know it by now, the human body consists of about 70% water, so the microwave could burn you.

If you’re only partially opening the door while the oven is still running, there is a risk that it will project a semi-focused beam of energy into the room. Not only would it injure you if you’re close enough, but kids and pets standing nearby are also at risk.

Injuries aside, the microwave could also damage any sensitive electronics that happen to be nearby (at feet away, not inches), including your laptop, smartphone, smart home devices, etc.

Should the microwave door be open when not in use?

The microwave should have the door closed when not in use. Most microwaves have an interior light that turns on when the door is open – an indicator that you should leave the appliance closed.

The main reason to leave it closed is that older or faulty models may turn on accidentally in case of electric current fluctuations or after short blackouts.

That said, after using the microwave, you should wipe it clean with a damp cloth and let it dry completely before closing the door.

The microwave turning on when the door opens is a cause of concern, but you can fix the issue without breaking the bank.

Have you ever changed the door switches on a microwave? Do you have other tips or advice? Tell us in a comment below.