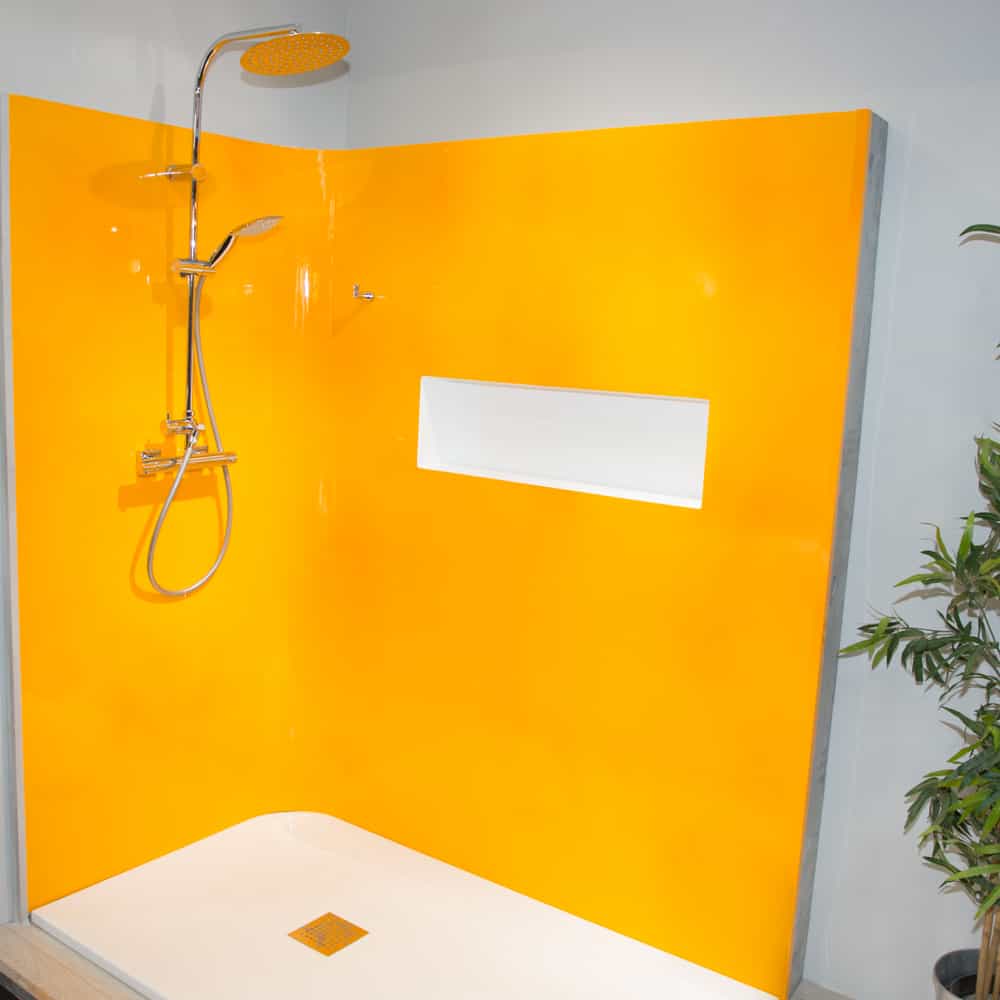 Fiberglass and one-piece shower units are extremely convenient to install – mostly because they provide a quick and leak-proof shower. Unfortunately, if you decide you no longer like the look, your fiberglass shower cracks, or you have other issues, you’ll have to take it out. And, figuring out how to remove a fiberglass shower unit can be extremely difficult.

That’s especially true if you want to do so without completely ruining the bathroom. However, taking your fiberglass shower out will involve removing the drywall behind it.

How to Remove Fiberglass Shower

Removing a fiberglass shower can be a lot of work. Often, fiberglass units are glued into the bathroom. Normally, this means they’ve been attached to a drywall area, which might have its own frame or be part of the wall. You’ll also have to look at baseboards and splash boards, which likely have to be removed before you can get started.

In some cases, you’ll need other tools. Those should come up contextually based on your shower, the drain, and other elements. E.g., if you have a twist in drain in your fiberglass shower, you might want a drain tool or a wrench and a pair of pliers to take it out.

1. Turn off the water

The first step to removing your old shower is to turn off the water. You can do so at the hot water tank or by turning off the water mains. Ideally, you have a shutoff for your full bathroom. It’s also a good idea to fill a bucket with water so you can still flush the toilet while doing the work.

2. Remove the taps and faucets

Depending on your shower, the faucet itself will either be part of the tap or separate. Remove the cover to the tap and take the screws out. Taking the tap off may require some wriggling. Once you have it off, you should have exposed copper or PEX piping.

If you expect the work to take a while, it’s always a good idea to cap the pipes off, so you can turn the water back on. Nearly all shower water supply lines are ½” in diameter in CTS size. If you buy two caps in that size, they will fit. However, you’ll likely want clamps rather than expanding caps, so that you can more easily take them off.

3. Remove the drain or drain screws

Most fiberglass showers are a one-piece shower stall. If you want to remove it, the drain might be part of the stall. However, there are almost always screws, glue, or crown nuts holding the shower drain in place. Here, the most likely is that you have a crown nut clamping a sealing ring in place – which keeps the whole thing waterproof against the drain pipe.

To remove this, you’ll want to remove the shower drain cap. In almost every case, you can simply insert an Allen wrench or a screwdriver into the grating of cap and pry it up. Then, you can check for screws underneath. Here, you might have a small screw on the side, a center nut, or a center screw. If you have a visible attachment, take that off.

If not, use a drain tool or a pair of pliers to apply pressure on the crown nut and turn it out. Then, lift the ring out, lift the seal out, and you should be good to go.

Alternatively, you might have a screw in drain. Here, you’ll have to insert a drain wrench or a wrench into the drain and twist it out that way. And, if you have access to the bottom of the shower, it might actually be sealed in with an adhesive ring on the bottom. You’ll have to cut or break this out.

4. Remove the baseboard and splash panels

Check around the shower stall for baseboard and splash panels overlapping with the fiberglass. Here, you’ll want to use a utility knife to cut away the silicone or other sealant around the panels. From there, you can insert a thin prybar underneath and pry them up. Chances are, they were installed with a significant amount of adhesive or small nails. Therefore, the panels may break when you pry them up. If you want to avoid this, have someone keep tension on the panel and slowly work a thin prybar underneath and pry up slowly.

Unfortunately, it’s unlikely you’ll be able to re-use the panels because it’s very likely there will be significant damage to the panel.

5. Cut around the fiberglass shower

Mark out where you’d like to remove the old drywall or tile. Here, it’s easiest if you remove the full drywall panel – because then you can replace a new one using the same joists. If you cut out at a random spot, you might not have full stud support on the ends. However, if your shower is worked into a corner or there’s a shower enclosure frame, you can likely just cut out the full enclosure.

For tile, you’ll want to use a grout removal tool to first remove the grout. An oscillating tool, a grout scraper, or even a flat screwdriver will do. Exercise caution to make sure you don’t chip the tile. Then, use a flat prybar to individually work under each tile and pry it up. Exercise caution and go slowly to avoid cracking the tile.

If you just have drywall, you can go ahead and simply draw a line up the sides you want to cut. Then, use a reciprocating saw or jigsaw to cut the drywall out. If you’d like to ensure you don’t cut pipes or crossbeams, you can use a utility knife for the full work instead. However, this will take significantly more time.

6. Pry the shower out

Once you’ve cut the drywall out, you can pry the old fiberglass shower out. If you want to take the old shower out without breaking it, you’ll have to exercise significant caution. Use a thin prybar and slowly force the drywall up at each joint.

You’ll also want to double check the top and bottom of the shower stall. If it’s been attached with screws, those will normally be on the outside or hidden under caps. Trying to rip the shower stall out without removing those stabilizers can ruin the shower.

If you intend to trash the shower stall, you can go ahead and use a larger crowbar. However, you should always wear a mask and safety glasses, as pieces of fiberglass in your lungs and eyes can be extremely dangerous.

Additionally, if your shower stall is made of multiple fiberglass panels instead of a single unit, it might be attached with screws rather than glued to the wall. Unfortunately, it’s also likely that both methods were used. Removing the drywall is always the fastest option.

If your fiberglass shower has a separate shower pan or a separate base, you can remove it at this stage. Here, you might have to scrape up any grout or remove tile covering the edge. In most cases, the shower pan is also glued to the bottom of the shower. In some cases, it may even have been put in while the shower bed was still wet. This means getting it up can require significant work.

The best option is to cut any silicone or sealant around the edges. Then, work a prybar under the edges and work that around the edges to pry it up as much as possible. Continue working deeper and move from side to side and around any accessible edge to keep the lift even. Eventually, this applies more pressure to the full shower pan.

How to Dispose of an Old Fiberglass Shower

If you’re replacing a fiberglass shower, you’ll want to make sure you dispose of the fiberglass safely. In most cases, waste and recycling stations won’t take it. Here, the best option is to call your local landfill. If they don’t accept fiberglass, they will tell you who to call who will.

Fiberglass should not go into normal trash because it is toxic and can be extremely dangerous to people and to wildlife.

What to Do After Removing Fiberglass Shower Panels?

In most cases, you remove a fiberglass shower to replace it with tile or to install a newer option. That means replacing the drywall you took out. You can also use this time to assess whether you want to install tiles instead of more fiberglass. Here, the steps should be:

It’s always a good idea to check the water supply lines, to consider if you want to replace them, and to check the integrity of the wall and floor while the shower is out. If there are problems, it’s easy enough to fix them now before you install the new shower.

If you still have questions about taking out a fiberglass shower, these might help.

Is it easy to remove a fiberglass shower?

In most cases, you can expect removing a fiberglass shower to take at least several hours. It can require significant physical effort to pry the old shower up. You’ll also need crowbars and protective eyewear when working with fiberglass.

Here, the safest option is to cut out the drywall around the shower and then pry that up. This also greatly reduces the work over trying to pry the shower unit out of the wall.

Can you replace a fiberglass shower with tile?

Yes. However, you’ll have to remove the drywall behind the shower and then replace it. Once you waterproof the new drywall, you can tile over it just like you would any other part of the bathroom.

How do you remove a fiberglass shower without breaking it?

It’s extremely difficult to remove a fiberglass shower without breaking it. Here, your best option is to go slowly, use thin pry bars, and slowly work your way down each side of the shower stall. If you exercise caution, it may be possible. However, applying too much pressure in any one place will break the stall. Therefore, you shouldn’t count on being able to take the shower out in one piece.

Removing a fiberglass shower is a lot of work. In most cases, the best option is to cut out the drywall around the shower. You can more easily replace that. And, if your shower has been glued in, chances are you’d rip the drywall up anyway. Good luck taking your shower stall out.