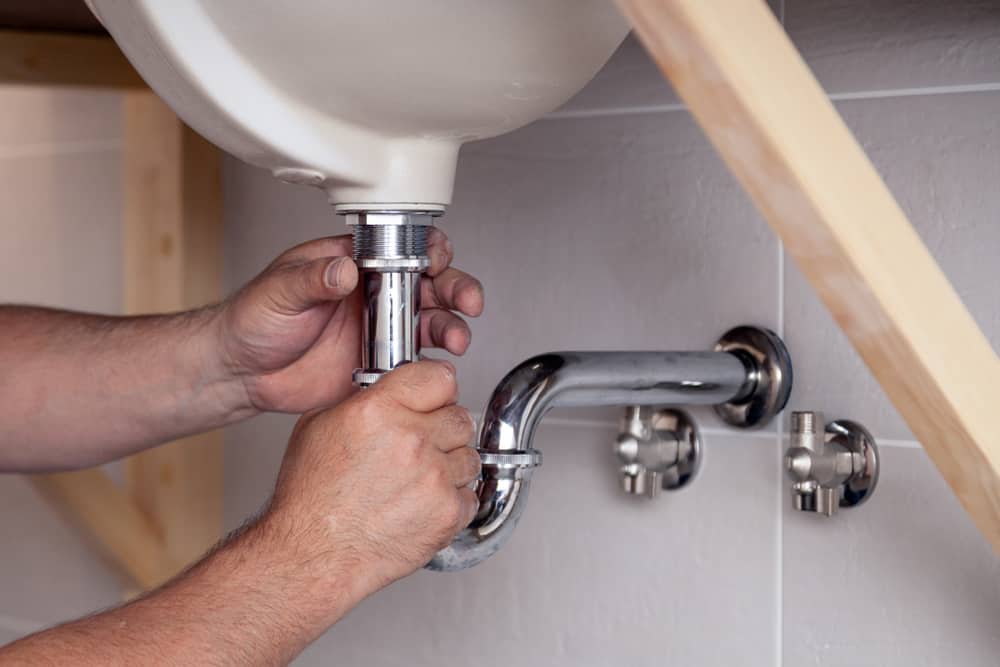 Plumbing traps are curved pieces of drainpipe installed on sinks and other fixture drains and designed to seal out toxic sewer gas. Current plumbing codes state that all homes must have P-traps installed. However, if you live or recently moved into a house with a plumbing system built in the early 20th century, you can still find S-traps in your home. Since S-traps can fail easily, you may want to know how to replace them.

The easiest way to replace S-trap with P-trap is with a trap conversion kit. Alternatively, you can cut the S-trap in half and install an air admittance valve. Another way to switch is by replacing the sink and toilet drain pipes completely.

How to Replace an S-Trap with A P-Trap

Replacing the S-trap with a P-trap is easy, and it can literally save your life. Follow the steps below that detail the conversion process along with what you’ll need to equip yourself with.

1. Remove the S-trap and sink drain

Turn off the water supply and place a bucket under the S-trap beneath your sink. Put on the gloves and use the pliers to unfasten the S-trap from the sink drain first and wall or floor drain after by turning the ring nuts counterclockwise. Place the trap into the bucket, then remove the sink’s tailpiece – although this portion of pipe may not be damaged, it you should replace the entire sink drain.

If you bought all components separately, use a reciprocating saw to cut a hole into the horizontal portion of the P-trap and make room for the air admittance valve.

This valve is only necessary to install if your plumbing system doesn’t have vents; some houses have vented drains despite using S-traps under the fixtures.

To install the valve, cut a hole of the right diameter, place the air admittance valve in position and fix it with plastic cement. If you’re not sure whether your drain system has vents or not, know that most wall drains are vented, whereas most floor drains aren’t. Gurgling sounds are also a sign of unvented drains.

Use a hacksaw to cut a length of PVC pipe and install it under the sink’s flange tailpiece, then connect the P-trap to it. Fix the drain to the sink with a ring nut, and use the same method to fasten the trap to the drain by turning the nuts clockwise.

If necessary, use the hacksaw to adjust the trap’s arm length. The arm is the horizontal portion connecting the trap to the wall drain pipe. If you have to adjust the length, keep in mind that the arm should be at least eight inches long.

5. Connect the P-trap to the wall or floor drain

P-traps generally connect to vented wall drains. However, you may have to adapt it to use with a floor drain when replacing an S-trap. To do this, adjust the arm length, then use a plumbing elbow to connect the trap to another length of pipe linked to the floor drain.

Use plastic cement to seal the pipe to the floor drain or ring nuts to fasten the trap to a wall drain. When done, turn on the water and check for leaks. That’s it.

An S-trap is a type of plumbing trap designed to keep sewer gas out of your home. Sewer gas is a mixture of gases produced in sewage systems through the decomposition of organic matter, including kitchen waste and human waste. The toxic gas includes methane, carbon monoxide, hydrogen sulfide, and ammonia, which are toxic and potentially life-threatening.

To keep this toxic gas mixture out of your home, all drain systems use traps. These traps are bent sections of pipe (shaped like an S in the case of S-traps and U-bent in the case of P-traps) that retain water in their downward-bent portion.

Water acts as a barrier between the sewer system and your interior, preventing gases from leaking into your bathroom or kitchen.

Due to their shape, S-traps siphon the water from your sink and move it through an unvented drain. However, the trap can siphon all water until it’s empty. Without the liquid barrier, sewer gases can leak and accumulate into your house.

Because some of these gases are hard to detect – carbon monoxide, for instance, is odorless – the government has banned the S-traps, meaning that you can’t buy or install them any longer.

Why S Traps Are Bad: 5 Reasons to Replace It

S-traps revolutionized the plumbing world when they were introduced back in 1775. At the time, they did what they were supposed to do brilliantly, but the main difference between a modern home and one from the sixteenth century is the increased water consumption of our era. S-traps didn’t quite manage to keep up with the times, and here are five reasons why you should replace them.

Plumbing traps were invented for a reason: to prevent sewer gas from leaking into homes. When the S-trap was invented, people didn’t have modern fixtures. Sure, there was a flush toilet, but showers and sinks with running waters didn’t yet exist.

With a reduced water consumption and no high pressure to siphon the water from an S-trap, these plumbing traps proved very effective.

However, the water consumption in our era makes them unsafe. Unlike P-traps, a trap system that uses vents to ensure water flow, S-traps are installed on unvented plumbing. The siphoning phenomenon is more accentuated by the higher flow rates, often leaving the trap dry.

Without the water barrier that prevents sewer gases from getting inside the house, you expose yourself and your family to a constant leak of toxic fumes. At higher concentrations, sewer gas is deadly. Thus, you should replace the S-trap with a P-trap.

For the reasons mentioned above, S-traps were banned in the USA and other parts of the world, including Canada and Europe – although most European countries use bottle-style traps instead of other plumbing traps.

While you could still find S-traps for sale in your local home improvement store, stores still sell them to allow homeowners to replace their existing S-traps. However, you won’t be able to find S-traps at all in most states, meaning that you’ll have to upgrade your draining system.

Because the government banned the S-traps, selling a home that uses this trap is much more complicated than selling an upgraded house.

Real estate inspectors may also put your property off the market until you renovate the plumbing – something that could turn out to be quite expensive.

For this reason, it is a good idea to replace the S-traps with P-traps before putting your property on the market.

S-traps aren’t built to handle high flow rates and clog faster than the P-traps. Not only will the water drain slower from your sink or tub, but you’ll also have to snake your drain constantly. Moreover, most S-traps require you to use fixtures with an overflow.

Alongside draining issues, S-traps can be the cause of overflow issues and floods. This is particularly true when you’re running appliances, such as the dishwasher or washing machine. If you have an S-trap and don’t want to replace it, at least consider investing in high-efficiency (HE) appliances that have a reduced water consumption, or appliances with an Eco function to prevent overflowing.

P-Trap vs. S-Trap: Which One Is Better?

P-traps and S-traps essentially do the same thing. However, there are essential differences between the two.

As their name suggests, S-traps resemble the letter S. They consist of a U bend located under the sink drain. Then, the pipe travels upwards only to bend again and connect to a floor drain. This setup has no horizontal pipe, but the upward turn should trap some water into the pipe.

However, a high flow rate can cause a siphoning effect that will suck most of the water in the trap, leaving it partially empty and with plenty of room for sewer gases to leak into the house.

P-traps resemble a sideways P. This kind of trap consists of a U bend under the sink drain that turns into a horizontal length of pipe that links the bend to a wall drain. Because the water travels downwards, then upwards, then horizontally, a P-trap isn’t subject to siphoning.

S-traps connect to unvented floor drains, meaning that the sewer gases remain trapped inside the drain. There is no way for them to escape your home unless the trap is empty.

P-traps connect to vented drains. Vents ensure a proper flow rate of the wastewater while also allowing sewer gases to escape from your home. Even if the P-trap gets dry (for instance, in a guest bathroom that you rarely use), the concentration of sewer gas getting into your house is smaller.

P-traps work well with all fixtures, whereas S-traps require fixtures with overflow due to their slower flow rate. It is easy to understand why P-traps are better.

Cost To Replace S-Trap With P-Trap

The total costs of materials shouldn’t exceed $50 for a fixture. So, if you replace the trap yourself, the whole project is inexpensive.

If you’d rather have it replaced professionally, you can expect to pay between $200 and $325 for materials and labor, depending on where you live.

Replacing an S-trap with a P-trap is crucial if you want to ensure your family’s safety. Using P-traps will also help you comply with the current legislation and will allow you to sell your home faster, should you want to. Whether you decide to replace the trap yourself or hire a plumber, take care of this issue as quickly as possible.