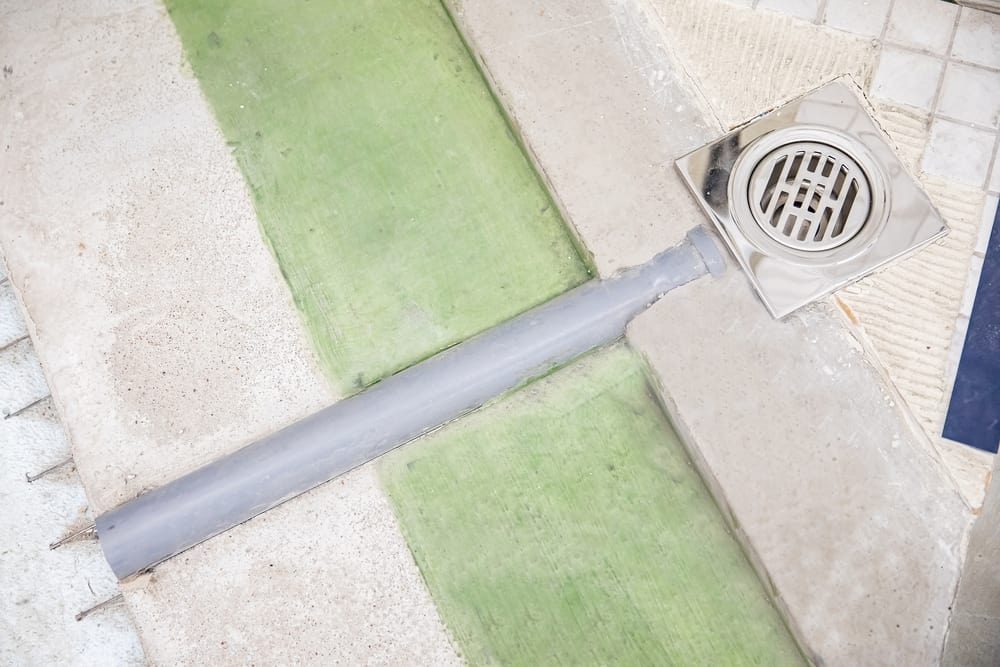 If you’re installing a new shower, you’ll have to rough in the drain. A rough-in is the initial phase of installation, where you lay pipes and fittings – but don’t yet install the final drain.

In most cases, your shower drain rough-in should occur before laying the concrete slab or the sub floor. However, if you’re laying fittings for a shower drain in an existing house, you’ll have a lot more work on your hands.

However, in most cases, all you’ll need to rough in your shower drain is a few tools and pipe.

How to Rough in a Shower Drain

Roughing in a shower drain means laying the pipes, p-trap, and connectors to connect to your eventual shower drain. This must be done before installing the shower itself.

This article covers how to rough in a shower drain in most homes.

Pipe lengths depend on the distance of your shower from the main sewer. However, in most bathrooms, you’ll already have run the main sewer relatively close for the toilet, and you will connect the shower drain to that.

Use a measuring tape and measure the distance between the drain and the main sewer. If you’re using a shower plate, you’ll want to lay that in place and mark the exact location of the drain. Here, installing pegs in the floor is a good idea if you’re working with a foundation.

If you have a plywood underfloor and you’re laying the plumbing in the crawlspace, you’ll want to lay the plywood and mark it with a pen or marker. Then, drill out the hole where the drain should be.

Here, a drill with a 2” forex or spade bit and a jigsaw are usually the easiest ways to do so. Then, mark the subfloor underneath. You’ll have to remove the plywood to continue the installation.

If you’re laying a drain in a cement or tile floor, it should be at the lowest part in the shower floor. It doesn’t matter how close to the wall the drain is.

Then, fit an upright pipe into the P-trap and water seal pipe and place it over the drain spot. Fix it in place with a stake or a board across the joists. Then install the T on this. Fix it in place where it should be in the installed shower or have someone hold it.

Then, measure from the T to the sewer. Depending on where the shower is, that will either be down through the wall, directly to the sewage pipe laid under the home, or horizontally across the floor.

The P-trap should be a minimum of 4” from the shower drain and a maximum of 5 feet.  Other than that, there are no standard shower drain rough in dimensions. They will always depend on where your plumbing is.

However, your shower cabin or panel may come with a diagram of recommended dimensions, which you can refer to.

Measure from the top of the T you installed. This should be a minimum of 4” from the end of the trap weir and no more than 8 feet from the weir.

Then, measure a line to the vent branch. If you haven’t roughed this in yet, you should decide where it should go. Alternatively, you could immediately vent the shower outdoors or directly to the vent stack.

The vent pipe must be a minimum of 45 degrees from horizontal. This prevents water buildup so that the vent remains dry.

Measure and cut the pipe for the shower drain and the shower vent. Here, you should use a measuring tape and a marker to mark out lengths.

Then, use a hacksaw or a pipe cutter to cut your lengths. Additionally, you’ll want to use a Stanley knife or sandpaper to remove any sharp edges.

Then, lay everything out with the connector fittings to make sure you have the right lengths.

Plot the path of your pipes through the wall and the floor. If they have to move through studs or joists, you’ll want to drill them.

Here, the hole should never be more than 25% of the stud’s width. If it is, you’ll have to reinforce the stud with a second board of the same size.

Additionally, you should keep holes to the center of the stud or joist and aligned with the angle of the pipe.

E.g., if you’re angling a vent pipe up at 45 degrees, the holes should be angled that way.

Ideally, you should use a Forstner or spade bit for drilling.

Lay your plumbing into the space and fit everything together. However, you shouldn’t glue it yet. Make sure everything reaches where you need it to be.

Then, cut your cent pipe and attach it to the vent branch or vent stack. Here, you normally want to use an angled T for the connection. Your waste pipe should drop by a quarter of an inch per foot.

Lay the waste pipe to the nearest soil pipe. If you already have an existing drain, you’ll want to tap into that instead.

Similarly, you likely want to join the shower and sink drains into the toilet soil pipe. This connection should always be downstream from the toilet vent.

In this case, it should be a minimum of four inches away from the toilet vent.

Fit your boss connector into the soil pipe. Here, it’s a great idea to get a boss cap with more access points than you need. You can cap the others off.

This allows you to access and flush the system if you have clogs. Use a boss or a strap on boss.

A boss connector requires that you cut the soil pipe and glue the whole thing back together. A strap on boss allows you to drill a hole into the side of the soil pipe, fit the boss, and strap it on around the soil pipe. Both options require pipe cement.

Then, make sure your pipes connect to the boss.

Once you’re certain of drain placement, you can glue everything together. Make sure you wear gloves and carefully glue the outside of the pipe and the inside of the fitting at each connection.

If you’re still working with an uncovered floor or there will still be dust and sawdust, cap the drainpipe sticking up out of the floor.

How to Install a Shower Drain in Concrete

If you’re putting a shower into a room with an already laid floor, you’ll have a lot more work ahead of you. For example, if you’re trying to figure out how to rough in a basement shower drain or some other drain without access below.

Unfortunately, if you’re roughing in a shower drain in a concrete floor, the only solution here is to break your concrete, install the drain underneath, and then re-fill the floor. Here, there are a few important steps:

How High Should the Shower Drain Be?

If you’re roughing in a shower drain, you want to install a drain pipe extending above the floor. That’s especially true if you have a subfloor in now or if you still have to install the subfloor and the floor.

In most cases, it’s a good idea to go up about a foot and a half from the floor. Then, when you go to install your shower, you can cut it to size based on the subfloor.

For example, if you’re installing a shower drain for tile, your drain needs to be about ¼ of an inch above the subfloor. However, you still want the drain itself to fit in flush with the floor – so the drain pipe can’t be too high.

Therefore, you shouldn’t cut it until the tiles are in place.

Roughing in a shower drain is not easy. Chances are, you still have questions. These answers should help.

How do you rough in a shower pan?

Does my shower drain need a trap?

Yes. If you don’t have a trap installed on your shower, sewer gasses will cause your shower to smell. They might also cause blockages and eventual overflow in the drain.

How do you cement around a shower drain?

Use a 4” or larger pipe to create a gap between the drain pipe and the space being filled with concrete. Then, use silicone to adhere the pipe to the floor.

If you’re laying a full new floor, you’ll want to lay rebar and then pour the concrete as normal.

If you’re filling a broken hole, you’ll want to lay rebar in the middle of the concrete hole. Then, you can add primer to the old concrete and pour the new concrete in.

How far can I install my P trap from the shower drain?

A p-trap can be a maximum of 5 feet from the shower drain. However, the closer the better.

In this case it can be as close as 4 inches. This ensures that the trap actually prevents gas and smell from rising back up through the sewer.

What size is a shower drain?

The minimum size for a shower drain is 2”. Older homes use 1 ½ inch pipes. However, all new installations are required to use 2” pipe.

How can I cap an old shower drain?

You can buy a pipe cap with a rubber seal to permanently seal your old shower drain. Install this by fitting it over the old drain, level with the floor.

Some caps include a wingnut tightening system. Others feature an expanding rubber ring. Therefore, you should follow the directions on the package.

Do I need a shower vent?

Yes. Your shower vent prevents air from building up in the drain. Air buildup will actually cause blockages and may cause overflowing drains.

It’s also required to have a vent in your drain. Here, you can connect the vent directly to the weir via a T-fitting that branches to the main drain and the vent just behind the weir.

Ideally, you should rough in the shower drain before laying a concrete floor. Your shower drain should also go in before the sub-floor where possible.

However, if that hasn’t happened, you’ll have to take the old floor up to access underneath. When that happens, it’s important to be careful not to damage the foundation or the concrete slab.

Hopefully this guide helped you learn how to rough in a shower drain in your home. Good luck with the work.