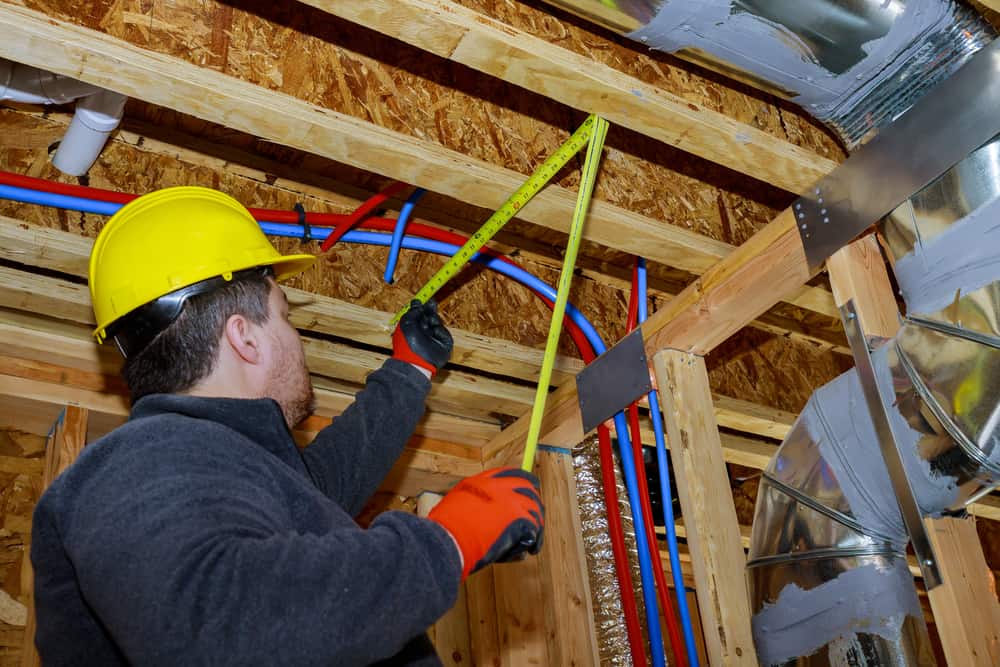 Coiled PEX pipe is one of the most popular tubing options for hot and cold water lines. The material is durable, easy to work with, doesn’t corrode, and doesn’t give off the “water hammer” noise associated with copper and steel piping.

Yet, due to the memory effect, uncoiling PEX tubing is often frustrating. If you’re planning to replace the pipes in your home, you might wonder how to straighten the PEX pipe before installing it. This guide will teach you how to do it and how to work with rolled PEX tubing without straightening it beforehand.

How To Straighten PEX Pipe

Straightening PEX pipes requires patience, but you can accomplish the task without too much effort. As a rule of thumb, PEX-A tubing is the most flexible and easier to straighten. PEX-B and PEX-C are stiffer, harder to straighten, and generally more difficult to work with. However, they are cheaper than PEX-A. That said, you can use the methods below to straighten any type of PEX tubing.

Using heat allows you to soften the PEX tubing and straighten it with little to no effort. The secret to keeping the PEX pipe straight is a thermic shock.

Get a plastic basin large enough to fit the PEX coil. Place the pipe coil in it and fill it with hot water. Let the tubing sit in hot water for a couple of hours, checking the water temperature from time to time. Top up with hot water if the water gets warm. Maintaining a hot temperature is crucial for softening the plastic pipe.

Place the coil on a PEX pipe uncoiler and straighten one section at a time. One of the easiest ways to do this is by keeping the pipe tight between your knees. Feed it slowly with one hand while bending it slightly in the opposite direction in which it coils with your other hand.

3. Cool Down The Straighten Section

The method above works great to straighten ¾ PEX tubing. If you want to straighten a 1-inch PEX pipe (which is slightly more challenging to straighten between your knees), you can follow the steps below – provided that you have enough space (a garden or driveway) and access to a faucet with hot and cold water.

Note: Some people claim that you can straighten PEX tubing by leaving it to warm up in the sun. However, the UV rays can damage the material – this is why you should always cover exposed PEX pipes. Although a few hours of sun exposure might not damage it, it is best to avoid unnecessary sun exposure if you don’t want to end up with a leaking pipe.

2. Use A PEX Pipe Straightener

A PEX pipe straightener is a tool with five grooved wheels designed to straighten the tube as you run it through them.

Most models come with adjustable wheels and work with all PEX tube sizes. Simply clamp the tool to your workbench and feed a length of pipe through it. For the best results, set the wheels at a distance large enough to let the pipe pass through but narrow enough to ensure a tight grip.

Move the pipe back and forth a few times to straighten it. Although the method is time-consuming, it is very effective. To minimize the effort, you can calculate the pipe length you need for your project and only straighten that length rather than the entire coil.

Pro Tip: If you don’t want to spend money on the tool, you can use a PEX crimping tool or a pipe wrench as a DIY PEX straightener. Run the tube through the tool while bending it in the direction opposite to its original bending direction.

In addition to the methods above, you can also straighten a PEX pipe roll manually. There are various ways to do this, but one of the most effective is using a doorway to bend the pipe and straighten it. This method works best with PEX-A tubing, which has a weaker memory effect compared to PEX-B and PEX-C.

The video below shows you how to do it:

How To Work With Rolled PEX Tubing

Straightening the PEX pipe may come in handy when installing the pipe vertically (for instance, when running the pipe from the floor to the showerhead). However, the process is time-consuming and impractical for most purposes.

In fact, working with rolled PEX tubing is easier than you think. A way to prevent it from coiling and kinking is using a PEX pipe uncoiler. This tool doesn’t straighten the pipe, but it prevents kinking and coiling when you’re pulling the pipe.

If you don’t want to spend money on an expensive uncoiler, you can make your own with a piece of plywood, a wheel, and a 5-gallon bucket screwed in the middle of the wheel.

Can I use a heat gun to straighten PEX?

No, you should never use a heat gun to straighten PEX. You shouldn’t use a hair dryer either. The main difficulty with heat guns and hair dryers is applying even heat while keeping the heat source far enough to prevent melting the pipe.

Hold the tool at least five to ten inches from the pipe and heat it, then straighten the kink. Cover the damaged area with an abrasion clip or hanger to prevent it from kinking again.

How to keep the PEX pipe straight?

All types of coiled PEX tubing feature a memory effect that causes them to spring back to the original shape when released. However, the plastic pipe loses memory quickly when you bend it to another shape. Thus, you generally don’t have to do anything to keep PEX tubes straight once you’ve straightened them.

Can you bend a straight PEX pipe?

Bending a straight PEX pipe is as easy as straightening coiled PEX. Heat the area you want to bend and shape it in the desired direction.

Coiled PEX pipe is often challenging to work with, but you can straighten it to make installation easier. Despite the extra work, PEX is often a better choice compared to copper or steel tubing, either for water lines or radiant floor heating systems. We hope this guide can help you straighten your PEX pipes effortlessly.