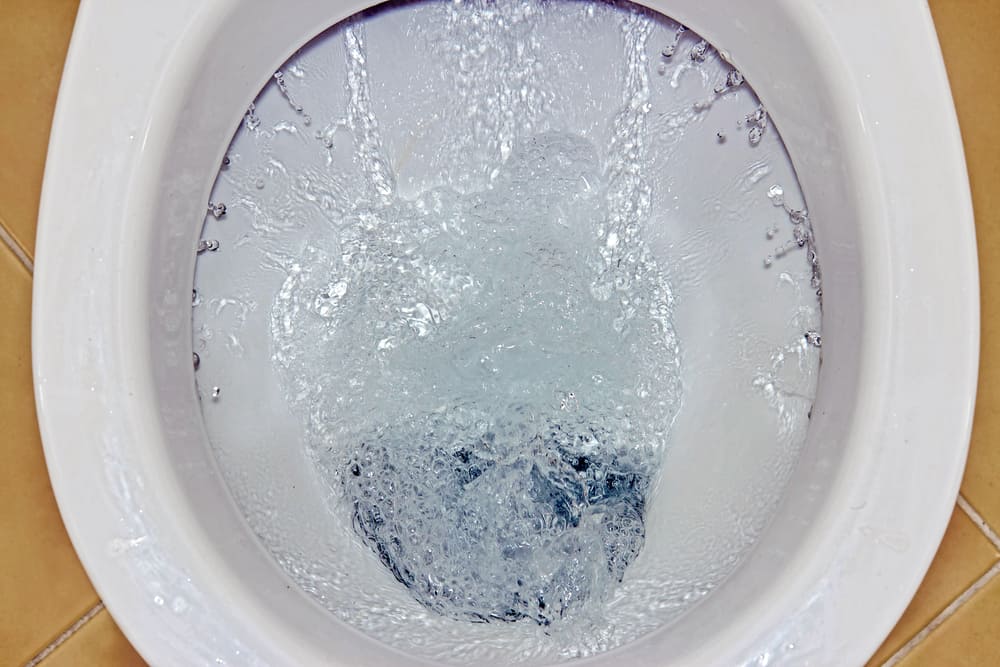 Toilets are such essential fixtures that even the slightest awkward noise can cause a panic attack in most homeowners. One of the most common unusual sounds is a high-pitched noise, similar to a whistle. It could happen when you flush, but also when the toilet is not in use. What is its cause?

Why Does Your Toilet Make High-Pitched Noise?

High-pitched noises can happen when you’re flushing or when the toilet is not in use. Let’s check out the main culprit for each instance.

When your toilet makes a whistling noise as you flush, the squeak is most likely an indicator that the ballcock or float valve is sealing the bottom of the tank. These faulty parts cause the water to leak and create a whistling sound.

When Not in Use

A high-pitched noise that happens after you’ve flushed when the toilet is not in use indicates a faulty fill valve. The gasket is most likely worn out, letting a slow stream of water pass through it.

Checking if this is the problem is fairly easy. Remove the toilet tank lid, locate the fill valve at the bottom of the tank, and keep your eyes on it as you’re flushing the toilet. If the valve vibrates, the gasket is loose or worn out and must be replaced.

You don’t have to replace the entire valve if you don’t feel like it. However, toilet fill valves are inexpensive and easy to replace. Thus, we recommend this option.

How Does a Toilet Fill Valve Work?

The toilet fill valve is a simple mechanism that, like any valve, opens and closes. When you flush the toilet, the lever opens the valve, letting the water flow into the tank.

The valve is attached to a ballcock system that drops when the water flushes down from the tank and raises as the tank refills. When the ballcock returns to its original position, the fill valve closes and stops the flow, preventing the toilet tank from overflowing.

To do its job, the fill valve uses a rubber gasket which seals the entryway when the valve is closed. If this gasket is worn out, it will fail to seal the valve completely, and the toilet will start making a whistling sound.

Replacing a faulty fill valve is so easy that even beginners can tackle the project successfully. Simply follow the steps below.

1. Gather the necessary tools and supplies

Replacing the toilet’s fill valve only requires a handful of tools:

Flush the toilet to remove most of the water in the tank, then remove the lid by lifting it. If you have a porcelain or ceramic toilet, remember that the lid is fairly heavy – ask someone to help you move it if you can’t lift it on your own.

You must now remove the rest of the water in the tank. Use a sponge to mop out the water directly into the toilet bowl or in a bucket.

You can generally unfasten the connection with a pair of pliers. Turn counterclockwise and apply torque until you feel the nut coming loose. You can continue turning by hand until the tube comes off.

Now, you can loosen the mounting nut on the valve’s flange in the same way you removed the tube. The valve might spin as you’re applying torque, so you might have to reach down inside the tank and hold it firmly in place until you unfasten the nut. Once unfastened, lift the fill valve and remove it from the tank.

Fill valves come in various sizes, and not all will match your toilet. We recommend buying the new fill valve only after you’ve removed the old one. Take the old valve to the store with you and buy an identical model.

Once you have the valve, slide the rubber washer that comes with it over the flange and adjust its height so that the top of the valve sits at least one inch above the overflow.

Position the valve in the place of the old one and hold it in place with one end. With the other hand, thread the mounting nut onto the tailpiece.

Tighten by hand until it’s hand-tight, then use the pliers to fasten it completely (without moving the body of the valve inside the tank). You can then reconnect the water supply line.

Turn on the water and let the tank fill. Flush your toilet and listen to the sounds it makes. You can also watch the valve.

If you notice that it vibrates or you still hear the high-pitched noises, something went wrong, and you have to reinstall it. If all is well, replace the tank lid, and you can enjoy using the toilet once again.

As you’ve read, it doesn’t take a rocket scientist to replace a toilet fill valve. However, you may still have questions. Check out the answers below.

How much does it cost to replace the toilet fill valve?

If you don’t mind replacing it yourself, a new fill valve can cost you between $8 and $30, depending on where you live and the type of toilet you have. To have it replaced by a professional, expect to pay about $50-$100 on average.

Why does my toilet randomly run for a few seconds?

Also known as a phantom flush, this phenomenon happens when the flush seal valve is worn out or has a worn-out gasket. This valve lets the water flush from the tank into the bowl. Small leaks might be difficult to notice, but they still cause the tank levels to drop. When the ballcock drops due to the lowering water level, the fill valve opens to refill the tank, causing the random noises that you hear.

What does it mean when the pipes make a high-pitched sound?

A high-pitched sound coming from the pipes rather than the toilet generally comes from the hot water pipe that expands as the scalding fluid passes through it. As it expands, the pipe rubs against the anchor straps and produces a shrieking sound.

While squeaking pipes don’t indicate major plumbing issues, they can be a cause for concern if you can’t sleep at night or if you live in an apartment building and your noisy pipes disturb the neighbors.

High-pitched, whistle-like sounds coming from the toilet aren’t a real cause for concern. You can solve the issue in under two hours and without spending too much. We hope this guide can help you replace the valve yourself or at least understand what’s happening if you decide to hire a plumber.