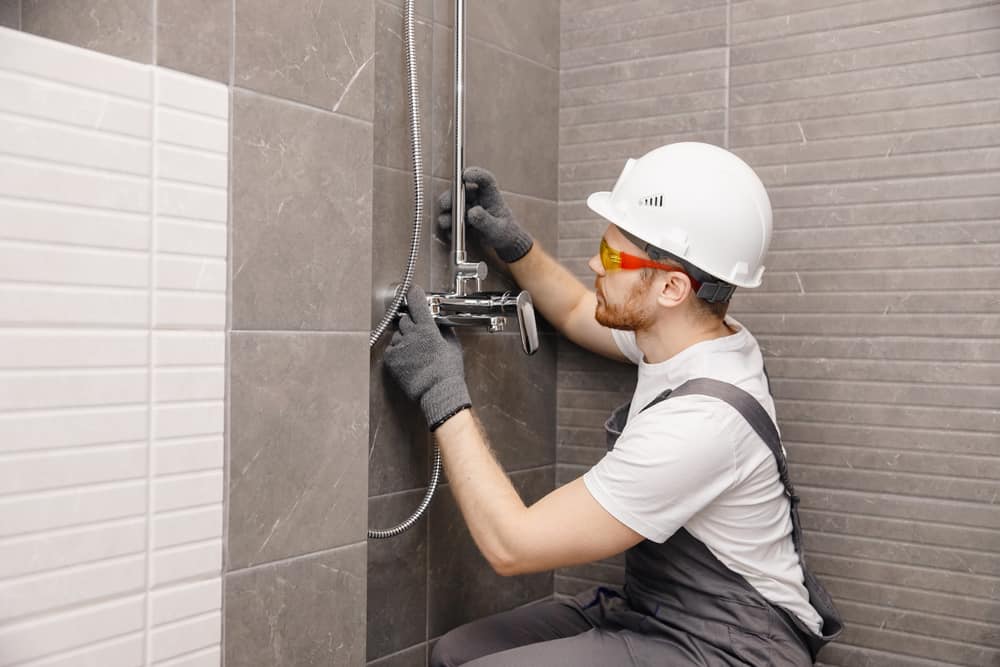 A nice long shower after a hard day’s work is refreshing, calming, and soothing. However, when water pools up and covers your ankles, stress sets in. Why is this happening, and can you fix this problem?

Water pooling on the shower floor is usually due to clogs or blockage. However, you could have an issue with the plumbing or shower floor slope. Regardless, you should fix this problem on your own or with the help of a professional to avoid greater damage.

3 Reasons Water Is Pooling On The Shower Floor

Pooling water on the shower floor may not seem like a big deal, but over time it can become one.

Standing water can cause discoloration, bad odors, a slip hazard, and promote the growth of mildew and mold or rot from constant humid conditions.

Read on to learn more about water pooling on your shower floor and how to fix it.

A clogged or blocked drain is the most common reason why water pools in the shower tray.

Many people like to use a hair trap to prevent long hair from going down the drain. The hair will stick to both sides of the trap, blocking and preventing the water from draining.

Take this trap off the floor and remove the hair trapped in it. Then, clean it with soap and water to remove any residue before putting it back into place.

Run the shower with and without the trap in place.

If the water pools only when the trap is in place despite cleaning it, replace the trap.

You may also notice a bad odor coming from the shower area. To fix this, you can use a drain cleaner that unclogs and freshens the drain along with a drain snake.

Or, you can consider cleaning and deodorizing the drain as you do with a shower head, using the following options:

A leak is a more costly problem since it may involve replacement parts or some demolition to get to the course of the problem.

If you find that water is pooling even if you have not taken a shower, then it may be coming from an issue with the cartridge valve. This part regulates the amount of water and its flow.

If the valve leaks then water is not moving through the plumbing as it should and can come up from the drain.

Leaks can also occur if the shower tap, or faucet, has an issue. Faucet leaks are a common issue here. However, if there is pooling, then it is indicative of a larger problem that is allowing a lot of water in.

The shower tap is where the shower hose connects to turn and mix the hot and cold water for your ideal water temperature.

If you see water dripping from the protruding plumbing, there may be a leak along those lines as well. There could be a leak in the plumbing along the wall, tiles, or underneath in the subflooring.

All plumbing leaks should be fixed by a professional. If you are feeling adventurous, try fixes for repairing the shower handle or installing a shower valve or shower drain.

Watch this video for a demonstration on repairing wall leaks:

If you choose to do any repairs yourself, do not forget to turn off the water supply before working. Also, make sure you use fresh caulk and grout formulated for use in water-prone areas.

If you are waiting for a plumber to help you out, you should get rid of the standing water. You should not leave large amounts of water sitting out to evaporate.

If the shower floor holds water it may not be sloped properly. The water is not moving towards the drain, resulting in pooling water. You could also have standing water at the back of the shower, or in low spots.

These problems typically result from improper installation or the floor is beginning to shift from settling, weight, or age. The shims underneath the shower tray may have cracked as well.

If your shower floor is uneven or moves when you stand on it, the tray is likely the root of your pooling problems.

To check if the slope is the cause of shower pooling, take a small ball, such as a golf ball, and roll it onto the floor of your shower. If it settles on the drain, then the slope is good.

If it goes elsewhere, then your floor is not set up to drain correctly.

Generally, this is going to involve some labor-intensive work. The shower tray may need to be removed down to the subflooring.

Any tiling and sections of the wall will need to be removed to access the plumbing.

Repairing the slope on a tiled floor is going to require even more demolition and cost. A pebble shower floor may also be prone to pooling due to the unevenness of the material.

After tray removal, a new tray can be installed to slope properly for optimal drainage. This could be a great opportunity to update your entire bathroom.

How long should the shower floor stay wet?

If the bathroom is well-ventilated, a shower floor can stay wet for up to eight hours.

If you find that your towels are still wet after eight hours as well, you may need a dehumidifier or moisture absorber.

Leave the ceiling fan on or a window open in the bathroom for longer periods to help ventilate it. Use a bath mat to absorb water from your feet after showering.

What happens if water gets under the tile in the shower?

Any moisture that gets under the tile in the shower can lead to extensive problems.

It can ruin the drywall backing, resulting in rot, mold, and mildew. Grout can loosen and tiles could fall off.

How do you know if the shower tray is leaking?

If tiles are loose around the shower tray or on the floor, or the carpet is damp in an adjacent room, the plumbing is leaking. You may also see water-stained ceilings or baseboards indicating that there is a leak somewhere.

Pooling water is never a good sign. Commonly, it is due to a clog that can be easily remediated on your own.

However, more serious issues such as a leak or an incorrectly sloped shower tray will result in more costly fixes.

It is important to get rid of standing water to prevent further complications. If in doubt, don’t hesitate to call a licensed plumber.