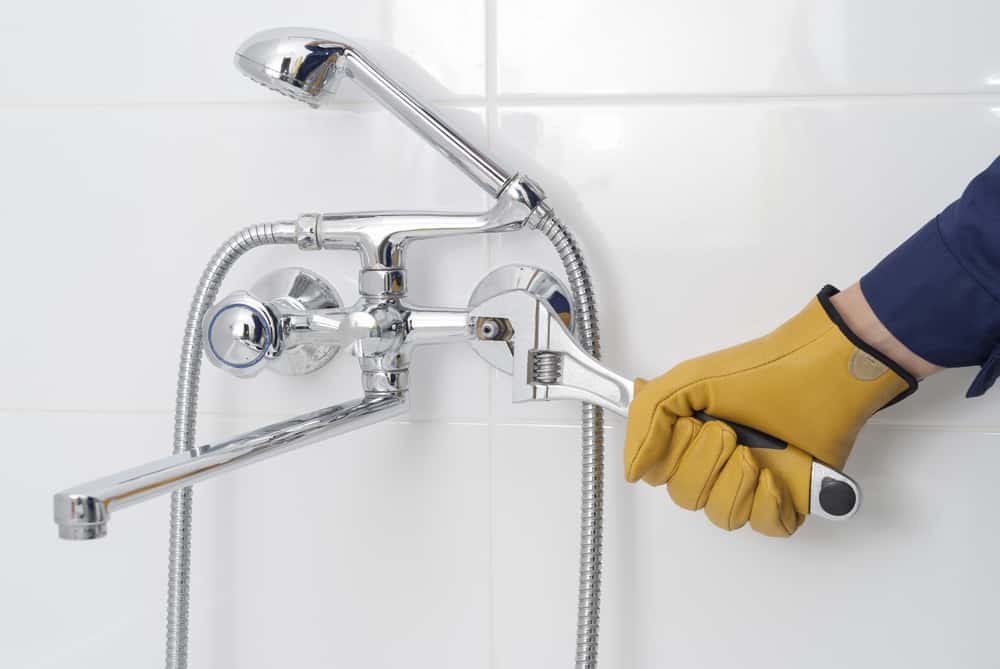 Do you have trouble turning the shower on and off, or is the handle leaking? The problem could be a faulty valve that needs servicing, but it could also be a broken shower handle stem. If it’s the latter, repairing the broken part is easier and cheaper than replacing the whole valve. Fixing a broken shower handle stem isn’t difficult unless you have a specialty faucet that is uncommon.

How To Fix A Broken Shower Handle Stem

The first thing to do if you have a broken shower handle is to identify the brand and model. You can then buy a replacement stem from your local home improvement store. Once you have the part, follow the steps below.

Before beginning any shower repair works, it is a good idea to turn off the water supply at the mains (you might need a wrench to turn the valve) and cover the shower drain.

Once you have turned off the water, you should drain the shower pipes to prevent getting soaked as you’re working on the handle. Due to the broken stem, you might not be able to turn on and drain the water in your shower pipes only, but draining the entire plumbing system in your house should do the trick.

To drain your plumbing system, turn on the faucet at the highest point in your home, then the one at the lowest point (usually in the basement). Wait until the water stops coming out of the lowest faucet.

You can now cover the shower drain using the drain stopper or a rag. This step is crucial to prevent losing any bits and pieces down the drain in case they fall off as you’re removing the shower handle or stem.

Whether you have to replace a single handle shower valve stem or a stem in a shower with two or three knobs, the handle removal process is similar. All you have to do is to locate the set screw that holds the handle in place and unfasten it.

Once located, unfasten the screw with an appropriate screwdriver (flathead or cross) and set it aside – you’ll need it to set the handle back in its place once you have replaced the stem.

A shower handle stem becomes visible as soon as you take off the handle. However, the stem is also attached to the shower valve, which is generally placed inside the wall.

In most cases, the valve is easily accessible through a gap in the wall hidden behind an escutcheon plate.

Escutcheon plates are generally fixed with caulk or screws. If yours is attached with screws, use a screwdriver to unfasten them and set them aside. Otherwise, use your pocket knife to remove as much caulk as possible from around the plate.

Insert the blade between the plate and the wall and pull it toward you to unstuck it from the wall. Set the plate aside.

Once you have removed the escutcheon plate and cleaned the opening from caulk, dirt, or debris, look inside and locate the hex bolt that connects the stem to the shower valve. Use a socket wrench of the appropriate size to remove the stem.

At this stage, all you have to do is to install the new stem by fastening its hex bolt to the valve and putting the faucet back together.

Remember when we mentioned that you have to identify the faucet model and brand? Well, that is crucial because there is no such thing as a universal shower stem. Each manufacturer and each model may use a different stem, so installing the right replacement part is paramount.

Most new shower faucets have the brand name or initials written on the plastic cap or embossed on the handle. However, older types of shower valve stems may not have a logo or initial. You can still find out what make and model they are by consulting the Central Components Company website or a plumbing book.

The video below explains how to identify a shower stem model using the plumbing book or the CCC website:

6. Put The Faucet Back Together

Once you have installed the new stem, slide the escutcheon plate back in its place and secure it to the wall with screws or caulk.

Slide the shower handle on the new stem and fix it with its screw. You can now turn on the water at the mains and let the plumbing system fill with water by opening the faucets. Remove the rag or drain stopper and turn on the shower. Turn the handle and see if it works properly and without leaks.

If the handle is still leaking or the shower doesn’t turn on, the culprit is the valve, and you have to replace it.

While replacing a shower handle stem isn’t hard, you might still have questions or doubts. Find some answers below.

How do you fix a shower faucet handle that came off?

Shower faucet handles can only come off if the set screw is loose or if it has come off completely. You can fix the issue easily by fastening the set screw. If you lost it, you can replace it with a similar size fastener – check your shower faucet’s instruction booklet or contact the manufacturer to find out what screw size to use.

Can you replace a shower valve without cutting the wall?

Yes, you can generally replace a shower valve from the front without cutting the wall. Shower valves are usually accessible through a hole masked by an escutcheon plate. However, if your shower handle doesn’t have such a plate, the valve is likely closed behind the wall, and you’ll have to cut it to gain access.

How do you replace a plastic shower stem?

Fixing a broken shower handle stem is child’s play as long as you can identify the shower faucet manufacturer and model. We hope this guide can help you fix your shower without having to spend money on a new valve or faucet.