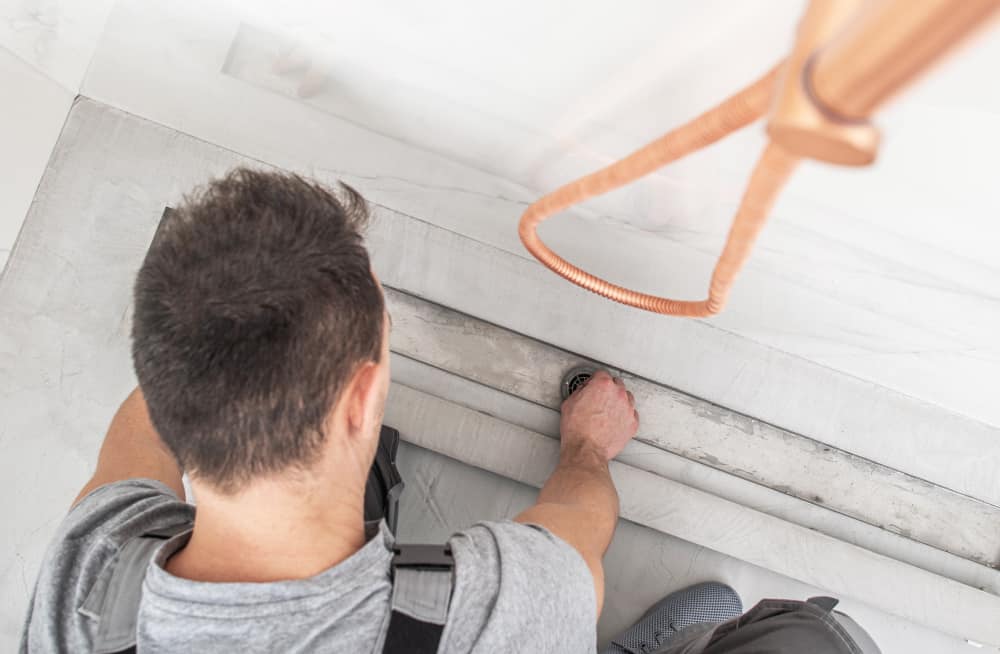 If you’re replacing a shower drain flange, you’ll have to pull the old one out of the floor. That can appear considerably difficult, especially if you have a flange without a visible center screw or bolt. The good news is that, even if you can’t see it, every drain flange has a nut holding it in place. You can take this out using either a pair of needle nose pliers or a shower drain wrench.

While removing your shower drain won’t always be easy, most people can do it themselves with little or no specialty tooling.

How to Remove Shower Drain Flange

The shower drain flange fits under the shower drain cover, protecting the surrounding shower pan and grout and connecting it to the drain itself. The drain flange is normally fiberglass, PVC, or even metal. However, it always installs via a 2-part process of bottom part and upper, which is glued or torqued into place.

Here, it’s also important to note that your shower drain might be compression or glued in.

This guide covers how to remove a shower drain and flange, whether they’re glued or bolted into place. If you have a compression shower drain, it’s a lot easier to remove than a glued one. However, you can remove both with roughly the same methods.

In some cases, you will need other tools. However, this list covers most tools you might need to remove standard shower drains or even linear shower drains.

The drain cap covers the shower drain flange and usually is the grated part of the shower drain. You can normally take this up by twisting the middle center screw. If you want to remove a shower drain cover with no screws, you can simply push a flat screwdriver or an Allen wrench into the grates and pry it up. Most shower grates simply snap on. In addition, you should look for a small screw or Allen screw on the side, which might hold it into place.

On very rare occasions, your shower drain will screw on. In this case, you can push a screwdriver into the grates and turn the grate to rotate it out.

What if your shower drain has been grouted on? If there’s grout covering the edges of the drain cap, you’ll want to use a flat screwdriver or a box knife to scrape the grout away. That will take some time but there’s no way to speed it up. Here, you should attempt to find the edges of the shower drain and then scrape as close to that edge as possible.

You can also use a small chisel to gently tap away the grout. Set the chisel at a 45 degree angle and tap on the top with a hammer. This will dig the chisel into the grout. However, if you have a plastic drain cover, it’s important to pay attention to when you hit the plastic.

If you have an old shower drain, chances are, it has a compression style flange. These are relatively easy to remove. However, the fixative can vary.

In addition, if your drain has access from below, it’s likely been glued in place. Here, you can tell by going into the space under the shower and looking for a sealing or fixative ring on the bottom. If this ring is in place, you’ll have to take that off before taking the shower off. How can you do so? Normally by either using a hacksaw to cut it off or using a hammer and screwdriver or chisel to knock the sealant ring off.

3. Taking the Crown Nut Out

The crown nut holds the sides of a multi-part drain flange in place. Taking it out is the first step to removing an old shower drain flange.

If you have a visible center bolt or screw, you can normally simply turn that to loosen the crown nut. If you want to remove a shower drain without a visible bolt, you’ll want to use either a pair of needle nose pliers or a shower drain wrench or pliers. You might have to clean the inside of the shower drain to even see it.

Shower Drain Wrench – A shower drain wrench is a large pair of pliers intended to fit perfectly into a shower drain. It also features four protruding grips, which you can use to grab the flange itself and lift it out of the drain after removing part of the drain. These are usually $10-$50 at the hardware store. However, if you don’t have one, a long pair of pliers will do.

Some new drains also include a flat panel which you can fit into the crown nut and twist it off using a flat screwdriver.

Insert your tool into the drain and apply outward pressure on two opposing inner walls. Then, holding the tool firmly so that it presses into the walls, turn the crown nut out. It should twist loose. Use the needle nose pliers to lift and pull it out.

5. Cut the Drain Flange and Body

Use a mini hacksaw to cut the drain body and flange. You’ll want to use a small hacksaw that fits inside the drain. If you can’t find one, a hacksaw blade, with one end wrapped in duct tape and a cloth so that it’s safe to hold, will do.

Here, you want two vertical cuts in the body, an inch or two apart. Be careful not to cut into the drain pan. You also want to cut into the flange at the top. However, you shouldn’t make these cuts all the way through the flange, as this will damage the pan underneath.

Apply a large flat screwdriver under the cut side of the flange and pry it up to break the top part. From there, you should be able to pry that section of the drain flange up and pull it out.

Compress the drain flange and press the two cut edges together. You may have to use a flat screwdriver to pry the edges out away from the shower pan if it’s been glued in place. Be careful not to damage the shower pan. Keep compressing until the retaining nut and washer either slide off or you can push them off the bottom of the flange. You’ll need a thin flat screwdriver to push it off.

Then, pull the drain flange out.

How to Replace a Drain Flange with a New One

If you’ve just removed an old drain flange, the only real preparation step is to clean the area as well as you can. Here, it’s a great idea to use an astringent cleaner that will remove any remaining glue or silicone. You’ll also want to physically scrape off any remaining bits of silicone or the shower ring. Acetone or a similar cleaning agent will do the job.

Then, allow it to dry.

Otherwise, you don’t normally need any special preparation. Instead, you’ll slide the retaining nut and washer over the 2” drainpipe and then you’ll screw the new drain down over top. Any other instructions will depend on whether you have a 3-point, multi-piece, or point drain. You’ll always want to follow the instructions that came with the new flange. Here, if you don’t have access to the drain from the bottom (such as a crawlspace), you’ll almost always have a twist-in drain flange.

However, depending on your purchase, you might also have a one-piece drain. This is a drain that’s part of the shower pan. You then simply tighten the nut into place to create a seal and it’s ready to use. On the other hand, you might have a multi-part drain with a flange, crown nut, multiple seals, and a middle flange, and then a strainer assembly or cap over the top.

Can I Remove a Drain Flange That Has Been Grouted In?

If your drain has been fully grouted in, your only option is to scrape the grout off. You can also get a miniature oscillating tool or a grout removal tool. If you don’t have either, a chisel, a utility knife, or even a flat screwdriver you don’t care too much about will do the job. Unfortunately, there is no other way to remove grout. Anything you dump on grout will not help to dissolve it faster. E.g., a common myth is that you can use sugar water to speed up dissolving grout. This is not true.

Instead, you’ll have to scrape away grout exactly where you need it removed. If you’re removing grout from the full shower, that can take time. However, as you’re likely only removing it from directly around the drain, it shouldn’t take more than an hour.

If you still have questions about replacing your shower drain flange, this FAQ should help.

How do I remove a drain flange on tile?

Removing an old shower drain flange on tile is the same process as removing it on other material. However, you’ll have to be more careful prying the flange up. For example, it may be important to be careful not to crack the tile. Your flange has also almost certainly been grouted in. In some cases, you’ll also have to take up the tiles immediately surrounding the flange. This happens when builders decide to install the tile over the flange, which shouldn’t normally be done.

How do you remove a drain flange without the tool?

In most cases, you can remove a drain flange by using a pair of needle nose pliers to apply outward pressure on the crown nut to twist it. You can then cut the flange itself, break it, and pull it out. However, if you’re removing a screw in flange, such as one on a tub or a 2-part shower pan, you’ll want a drain tool. If you don’t have a drain tool, you can fit pliers or an adjustable wrench into the grate on the drain and turn that instead.

Why doesn’t my drain have any screws?

Many flanges have a 2-part makeup, in which there’s a middle flange or a crown nut that screws into place. This hides the screw mechanism. However, a lack of screws might also mean that your drain has been glued in place. If that’s the case, you have access to the drain from below. Here, you can take off the P-trap from below and then work the adhesive ring out or cut the drain pipe off level with the floor and slide the whole thing out.

How do you remove a metal drain?

If you’re installing a new shower, want to remove the drain pan, want to lay a new shower bed, or want to replace the drain, you’ll have to take the flange out. That can be intimidating, especially if the old flange is glued or grouted in place. Luckily, most drain flanges use a crown nut mechanism and can be twisted out, even without any specialty tools.