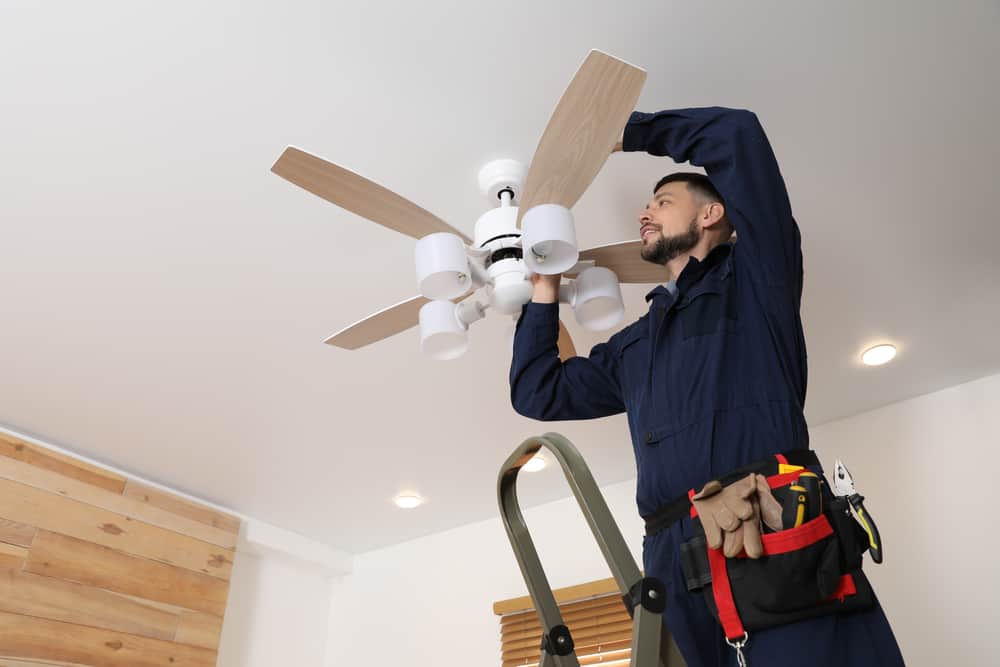 How to Reverse Ceiling Fan Direction (No Switch)

Almost all ceiling fans have a reverse switch on the motor. Normally, this switch is located on the housing next to the pull cable or near a plug on the casing behind the blades. However, very old ceiling fans might not have a reverse switch. Instead, these ceiling fans have adjustable blades, allowing you to change the pitch of the blade. Setting a left pitch pushes air down and a right pitch pushes air up. Therefore, you can achieve the same result as reversing the blades.

There are two instances in which you might not have a switch on your fan housing:

Checking for a Switch

Almost every fan has a switch on the housing. Therefore, you can take a few minutes to do a quick check of the housing to make sure you haven’t missed it. Here, you’ll want to get a step ladder so you can access the fan.

Tip: Turn the ceiling fan off and allow the blades to stop turning naturally. Make sure the switch is in the off direction. If the ceiling fan has a pull cord, tuck it up out of the way so you don’t accidentally pull it while inspecting the housing.

If you do find either a horizontal or vertical switch, you can simply push it in the opposite direction to reverse the direction of the fan. If you don’t, you might have a remote somewhere.

Here, there are several options:

Many fans use custom operation sequences to reverse the direction of the fan. Unfortunately, this can vary quite a bit between the make and model of the fan.

Minka Aire fans come with a wall switch with speed controls and a reverse switch. In most cases, they also come with a remote control. If you no longer have the original wall operational switch or the remote control, you can either look on the housing for a slide switch or buy a new full function remote control from Minka Aire.

Otherwise, the only option is to open the housing and adjust the wiring. Here, you’ll want to make sure that you turn your fan off. Then, turn the circuit supplying power to that room of the house off. Open the housing. You’ll see black and white wires. You can simply reverse these to reverse the direction of the fan.

If your Hunter ceiling fan doesn’t have a remote switch on the fan body, you can change the direction using the remote. Here, you’ll want to turn the fan on and then press and hold the fan button or the wall control until the control light blinks.

Some Hunter ceiling fan models also want you to turn the fan on high before doing this. In either case, the control light should blink to indicate the fan is reversing.

Most Hampton Bay ceiling fans feature a switch on the casing. In addition, many come with remotes with either a “reverse” or a “rev/” button. However, in some lower-end models, the remotes came without a reverse button. Luckily, the contact is still there inside the remote. You’ll just have to open the remote up to access it.

You’ll need a screwdriver and a spudger or a scraping tool.

Unfortunately, this issue comes from the fact that Hampton Bay used a cheaper remote control model for some of its fans. These do not have a reverse switch.

Harbor Breeze always has a reverse or For/Rev button on its remote controls. In addition, most Harbor Breeze fans work with universal remotes. Therefore, if you’ve lost your remote and can’t reverse the fan, you can buy a replacement remote to fix the issue.

Can I Reverse My Ceiling Fan Direction with No Fan and No Remote?

If you don’t want to buy a replacement remote for your ceiling fan, you can always use the wiring to reverse the direction of the fan. Here, it’s important to keep in mind that you should never do this with a fan that still has a warranty as you will void the warranty.

Unfortunately, this method can be difficult if you have limited mobility or if your fan is very difficult to get open. In this case, you might either want to order a new remote or hire a technician to do the work for you. In addition, some fans have a different switch wiring diagram, if you don’t see four wires, you may want to look up your specific fan’s wiring before moving forward.

If you still have questions about reversing your ceiling fan, these answers should help.

Do all ceiling fans have a reverse switch?

No. However, almost all modern ceiling fans have a reverse switch. If your ceiling fan is very old, it may have reversible blades instead. Here, you can adjust the blades to the left or the right to get the same effect. On the other hand, you may have a switch inside the ceiling fan housing. In addition, some very low-end modern ceiling fans might not have a switch, especially if they’re about 10-15 years old. If you buy a new one, it will almost certainly have the switch in place.

If your ceiling fan won’t reverse direction, it may mean the switch is broken. However, you may also have to use the wall switch or the remote while the fan is off, while the fan is on high, or while the fan is on low. Different manufacturers use different mechanisms to try to avoid people accidentally pushing the button, so either check your owner’s manual or look up your fan. If you think the switch itself is broken, you can try manually reversing the wiring instead.

Where is the reverse switch on my ceiling fan?

Almost all ceiling fans have a switch on the housing or the cap. This is normally next to the pull cord if your fan has one. If not, it’s normally on a side of the cap between two screws.

Most modern ceiling fans have a switch to reverse the direction. However, if you’re unlucky, yours doesn’t. The reverse mechanism may be on the remote, on the wall switch, or worse, hidden away inside a remote that doesn’t have a reverse button. Good luck figuring out what your fan needs to reverse it.